Hello sir! Here's your ticket for International Flight 1337. I would like to inform you that due to complications caused by volcanic ash there will only be one toilet available during the following 26 hours. Enjoy your flight!

Hm. The plane is unusually empty for this time of the year. Not even one fatso slowly pushing me out of my seat or a baby pulling my hairs out from behind. Finally a decent.. oh for Lord’s sake. why do they always make you go through Business Class first? I guess it's off to the lower-level... ah! What’s this -
A Business Class ticket tentatively lying on the ground? 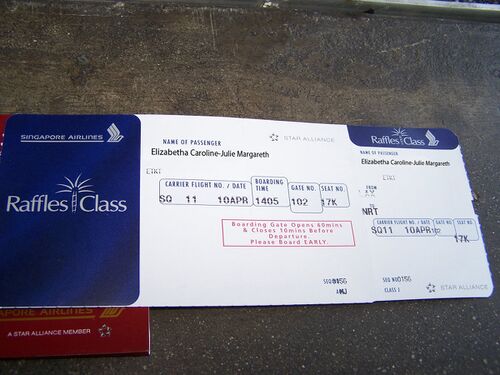 Ooh, and there's a passport too? How convenient! 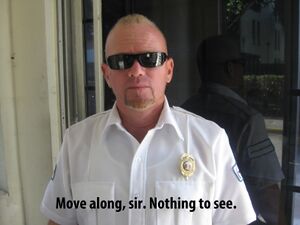 My best friend at the Polo Club! The security guard.

...
Gahhhhhhh the pleasures of modern-day travelling. I shall be recommending this air company and its fine long-legged stewardesses to all of my friends at the polo club.

no I don’t have my club card with me, unfortunately.
must be in one of my other light yellow suede pants indeed...

"Ladies and gentlemen, this is your fine long-legged stewardess speaking. It is about twenty-three minutes before 1:00 am and our narrator is soon going to wake to the sound of a loud noise. Please remain seated and do not be alarmed by any sound of repeated stabbing - or screaming."

What the devil was that? What’s going on down there at Economy Class? My, am I happy I... WHAT? I have to investigate this?! Bullocks, I am retiring right after the plane crashes lands. I tell you, this is the last time I’ll appear in an Uncyclopedia article.

Sigh. Go ahead Missus stewardess, tell me what happened. Nothing? Stabbing noises just a terrorist, nothing more? Aha, everything happened when Mr. Dupont went to the plane bathroom (there's only one bathroom in the whole plane? Really?). Very interesting indeed... That naked and elderly lady (bingo!) over there looks a bit upset. Apparently the terrorist tried to steal her bag. Luckily, he only managed to take her kimono.

Thump - Ouch, the plane does shake a lot because of that turbulence... or is my stomach upset again? Damned chili beans, always spoiling the crime scene fun. But hold on, what’s that down there, further away in the corridor, waiting in line for the only toilet on the damned plane? A KIMONO? Unfortunately I do not have my glasses on me and my thorax hurts so I will return to my seat. Maybe next time.

Chapter Three: The Only Toilet on the Damned Plane (Becomes a Crime Scene)[edit] 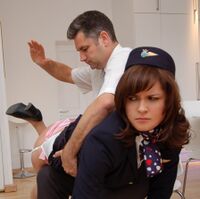 Crappy airplane cushion? This prize is much better.

“Ladies and gentlemen, this is your fine long-legged stewardess speaking again. It is morning and our narrator is soon going to find Mr Dupont dead in the only toilet on the damned plane. For those who had placed a bet on Mr Dupont’s number One, congratulations! You have won another crappy airplane cushion.”

Now let’s see. Quite a few stabs... different depths... different nail polish colors around the wounds... Hold on, this wound is much deeper than the other ones. For some reason it’s also... Manlier. What’s this, a pilot medal hidden in the wound, a co-pilot handkerchief under the chair of the victim and a terrorist beard hair in the victim’s sammich? The wildly different directions to which all this evidence points can only mean one thing: I am challenged by some kind of evil mastermind...

More material for my collection the case!

Intermission: "Managing all the clues"
Let’s see... all of these damned snakes go in this box... severed limbs go over there... explicit love letters between stewardesses in my bag that box...
Intermission End

“Ladies and gentlemen, this is your narrator speaking. As all stewardesses are currently part of an ongoing crime scene investigation I will be doing the announcements from now on. The sky is clear, on the ground the air is cold and humid. The farmer on your deep right has just finished ploughing the land and will shortly return to his farm to demand a bacon and eggs sammich from his wife. That’s all for now, please stay tuned for more pointless rambling.” 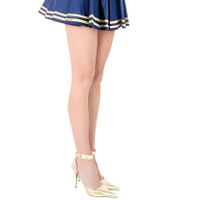 It appears our victim wasn't a very innocent man himself! A frequent airline-flyer, it seems Mr. Dupont had become obsessed during boring, tiresome flights with the lovely buttocks of stewardesses parading up and down the corridors. On 19 September 2009, fate struck in mid-air. Upon the closing in of yet another lovely stewardess buttock, Mr Dupont’s left hand suddenly became agitated with uncontrollable spasms, spread its wings and slapped the Holy Virgin out of of 18-year old Aleksandra Toichoiva, who lost her life in that awful moment. After her body she had been dumped given a traditional air burial somewhere near one of Ghana’s tropical forests, an air marshall attempted to arrest Mr. Dupont, but the latter managed to escape with an emergency parachute and was never heard of again.

With the history of our victim Dupont elucidated, it is time to have a look at the background of our murder suspects. I am sure I will be able to discover connections amongst them to Mr. Dupont’s own victim, Aleksandra!

“Ladies and gentlemen, this is your narrator speaking. The whole airplane crew is in custody, but don’t worry, we’re on auto-pilot. No reason to panic at all.”

I think it’s time to check my list with detailed information about the suspects and their background. I cannot wait to see what it will reveal! 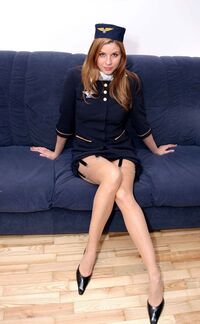 You want to be interrogated? What's that supposed to mean?

- Third blonde stewardess: some other family member of Aleksandra nobody cares about

- Stewardess who used to be a brunette but after having been confronted with concerns raised by other stewardesses about professionalism and demanded level of sexyness decided to dye her hair blonde too: Aleksandra’s maid - and your mom, apparently (Pictured)

- Naked old lady: I don’t know why she’s on my list, but my instinct tells me I need to interrogate her... more.

- You: have become an accomplice too since you read all this stuff. Uhuh. I’m watching you. Don’t you dare leaving your airplane seat, even if it’s only for your grandmother's groceries, you little bitch.

Mm... Now let me meditate on pr0n the evidence.

TO THE BATHROOM! and after that THE COCKPIT!

...Assemled stewardesses, pilots, naked ladies, terrorists, Oscar and You: greetings. My name is Your Narrator and I will be doing the ceremonial all-revealing end-of-the-plot speech for this plagiarized modernized crime novel. 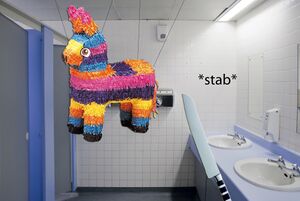 I have two theories to present to you about the murder of Mr. Dupont.
Theory number one: the victim tripped over his own shoelace, fell, and smashed his head against the toilet seat, knocking him out. The gangster at seat 27D then decided to go to the only bathroom on the damned plane, found the body, and stabbed it out of mere habit. He then emptied his pockets on the victim's body (explaining all the random evidence) and left the crime scene, unnoticed.
Theory number two is rather more sensational: All of you are guilty.
Aleksandra was dead, and you decided to celebrate the end of her young but terrible long-legged reign over the family - by taking a little vacation trip. You ended up on Flight 7331, where you realized during discussion that the family needed a new foreman now that Aleksandra was gone. It was decided to settle the matter by traditional pinata lottery. The event was to take place in the only toilet on the damned plane, and a kitchen knife was to be used as a pinata bat was unavailable. 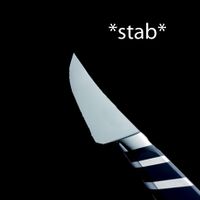 Then came the turbulence and lights in the plane went out.

In the darkness, all of you mistook poor Mr. Dupont for the pinata and subsequently stabbed him until you felt no resistance left. You interpreted the screams as sounds of joy and only discovered what you had done after the lights went on again. In the panic you decided to keep what had happened secret and each of you returned one by one to their places, leaving dead Dupont - and crucial evidence - behind in the toilet.

As I am revealing the details of this elaborate nonsense story, I see many of you breaking down in tears... What?! You're confessing to my second theory? Please don't do that. I don't want family drama, I just want to go home. Can't you just admit to theory number one instead?

Chapter Seven: Ur Doin it Wrong[edit]