“A few beers, some ribs, and a dead hooker...yep, lots of fond memories from Ponty Pubs.”

Their are several fine eating and drinking venues in Pontypridd. Whilst most are clustered around the centre of Pontypridd proper, aka Ponty Town, some can be found in outlying areas such as Treforest.

This is the hub of the Pontypridd area. Christ it's noble. Like a fackin' national institution, that's what it is. 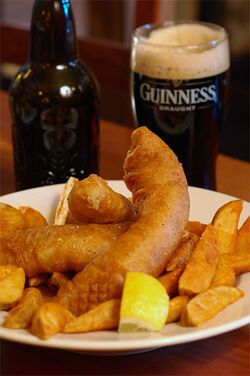 Fried dog's pud 'n chips is a staple of Alfred's.

No one is really sure how this place came about but wise people (those with jobs) say that one morning a glowing green rock appeared upon the Common high above the town. A man called Inkpen put this stone in his pocket and made his way towards The Market Tav. Then whilst Inkpen was chatting to the resident Druid the rock flew out of his pocket and hit a chap known as Didds smack upon the forehead.

From this point onwards Didds, along with his society of forward-looking birds, have entertained the very strange notion that Ponty is better than everyone else knows it's not. The Druid group -- Inkpen, Didds, Lambert, and Whorter -- bought shares in supermarket groups (but not JS Sanghera's supermarkets, as they are evil and owned entirely by rotters).

As a tax dodge the Druids started Alfreds Bar and Grill. It is a pub, and they have a grill upon which they cook kidneys, leeks, chips, and battered dog's puds.

This pub sports smoke-crusted rafters, dirty varnish, and a lighting scheme straight from the Caves of Cunmarragagh. Generations of drunken patrons have carved their names on the underside of the bar.

Your grandad will love it. Your dad will like it. You will think its OK. Your Mum will die.

This is a holding area for Rhondda visitors. Tourist coaches arrive 12:00 sharp and passengers receive five pints of watery piss for £2 and a punch in the crutch. Those over 120 years old drink free.

Clwb Y Bont (trans: The place upon the sacred ground of watered plenty)[edit]

This is the only place in town to be if you do not want to be a fashion poser. Cheap is the bear as is the beer and the decor. Friday is the best night if you not a Student then thats Thursday doubles for the price of the ice and that sort of stuff with production of NUS card or just cash. Live bands at the weekends, dead bands on Tues and Thurs, zombie undead bands on Fri midnight. This place is very dark and dingy but very student-friendly. One problem: no weak cider is served and they seem to think lager (unless Stella) is for wimps. A bottle of wine costs £7 thats all!

This is the gay pub of Pontypridd. It's also known as Ponty Pride, or the Ponty Poker Ride, or the Pointy Pecker Slide. The backroom is a creche; the basement holds the remains of the 1918 Wolverhampton Wanderers footy team nicely packed in dry ice.

Bit like the gay pub but for slightly older children. Over 12's only; no gingers; playing through on Thursdays; all Wickingham and Bishops Stoat please pass.

Some say it has been there for years other say just under a year. In reality it's a mushroom. Other than that, who knows? But for sure don't tell your mates because we like it just the way it is.

Busy BB's is an Internet café in the Indoor Market in Pontypridd town centre. It is known for its excellent service to customers who use computers, particularly those who access bulletin boards -- hence the "BB" in the name.

However, Scotland Yard have uncovered a Viagra-doping scheme which used an internet virus originating at Busy BB's to give Parliament's members whopping great -- well, you know. Oddly the most affected was Gwyneth Dunwoody who got a woody the size of the Tower.

This is the general area in and around Treforest.

Recently rebuilt following the Tânmawr, this pub is currently the center of the vast Otley empire.

Just like the Otley, John Keats once puked here, a fact noted by Marcel Proust in Dubliners.

The Richard Arms does in fact have the armbones of King Richard III nailed to the wall behind the Tizer taps. They also have Cromwell's kidneystones in a jar by the till.

The best pub in Treforest