“Oh yes, my lady, in contrast to popular belief it is this big.”
~ Oscar Wilde on This big

This big is a measure used mainly in science and fishing in the need of extreme accuracy of distances. Several standard human distances are available to accurately display the size of your scientific findings or caught fish. The most common standard is based on the exact distance between two hands. For smaller distances the distance between two fingers is often used. It needs to be noted that this second measure is seldom used in the field of fishing.

The person wanting to remember the size uses their hands or fingers as calipers in order to measure it to scale. This information is directly stored in the human brain in floating-point format. At parties and other jolly occasions it can be expressed by recreating the distance used during measuring…subject to possible round-off errors, which are usually insignificant.

While some less intelligent species in the world have adopted less accurate measures like the meter, there is still a complete and accurate system of feet and thumb-sizes available to those seeking accuracy. A set of standard arms made out of platinum can be found in the institute of human distances in Paris. 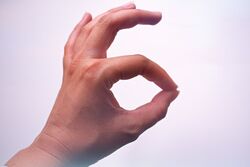 While it is suspected that the two finger "this big" measure is only used in science, it is rumored that females also use it to explain to their friends that while size doesn't matter it shouldn't be this small.