The Tale of Davy Crockett 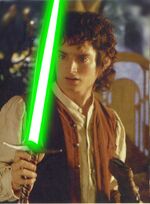 This is the main character. He was named after Davy Crockett's blue ox Babe, only with a different name.

The Tale of Davy Crockett is a children's bedtime story, which by the turn of the century had exploded into a huge phenomenon in theaters. This tale is renowned for having an amazing influence on almost all aspects of life and for featuring the first occurrence of Jedi in a major motion picture.

While many of the details of the protagonist's (Davy Crockett's) life lay shrouded in secrecy a great deal about his personal likes and dislikes were made publicly available thanks to the tireless work of some guys who have created an article about him and have done little else of significant importance with their lives.

This article will delve deeply into the creation of one of the greatest tales of our time.

The original idea for The Tale of Davy Crockett began in 1821 in Bridgeport. Writing furiously on a yellow legal pad an anonymous stranger named Davy Crockett was fast becoming a legend! He had already shown his box-office potential with the release of a space-opera set in the futuristic year of a long time ago in the land of spaceships and bears.

The main character for the original opera was named after Davy Crockett's blue ox Babe, but with a different name. A name that will never be forgotten, ever.

So this main character with the name you will never forget, who was named after the blue ox Babe but having a different name altogether, must make tough decisions. There is also a sex scene. Then, as is alluded to in the personal article of Davy Crockett, the entire universe was blown up.

Since this first movie was based upon a true story and the universe was in fact blown up and in reality no longer existed, this anonymous stranger whom no one ever knew who was named Davy Crockett was struggling with a storyline that could involve a missing universe. Then inspiration hit!

In reality, a car hit... Davy Crockett, and he was killed instantly and the pictures of the accident wound up on the Internet. It was a sad day for America, and then the lesser place called the rest of the world.

Once Davy Crockett had recovered from being killed he decided that his story would involve a bear. Naturally many honey manufacturers were happy to hear this, but wondered instead if it couldn't be a giant bee that kills the bear. Davy Crockett, ever faithful to his fans, decided to turn upon his fans and change the storyline to meet the requests of the men who paid him money instead of just posting on his blog.

With money in hand, this unknown, anonymous man named Davy Crockett set out to write his story. But tragically, his trip to the typewriter was cut short. He was killed again, this time by a dragon.

The complex interplay of dragon vs. man[edit]

Since the story was pretty much completely written and since Davy Crockett was quite obviously immortal, Davy decided to burst forth from the belly of the dragon.

This was caught on videotape, of course, and received a $100,000 prize on America's Funniest Home Videos. Of course, as is common knowledge these days, $100,000 is the most money a person can ever have! So with this money Davy Crockett took a bag of apple seeds and began to rebuild the universe - which had been completely destroyed and no longer existed. This is where the true tale begins.

Following the guidelines of his own story, Davy Crockett sailed across the ocean where he met a mysterious race of people called the Incas. By using only his voice Davy Crockett uttered some magical words and killed the Harkonen! Then he took all the gold from their temples!

That was not actually part of the story but it serves to illustrate the fact that Davy, like so many great men or women of his time, was probably a Ninja, a Pirate or perhaps the elusive, mysterious Werepirateninja which is a pirate by day, ninja by night and both on a full-moon!

But that is neither here nor there. Or is it?

The real tale of the anonymous, unnamed man who was well known and named Davy Crockett is long lost in the sands of time, retold only by those very few millions who still own the full DVD set director's cut or for anyone that can turn on the Davy Crockett Channel.

Also, it has never been forgotten. Not even by those who remember it not.