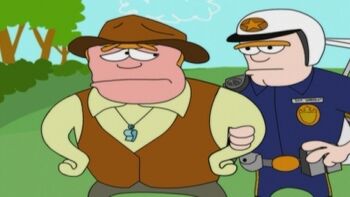 "Eh, not catchy enough. How about Samurai Bob and the Handymen?"

With a final stomp of his steel-toed shoe, Bob crushed the wolverine's head and took a prim bow. The talent agent shot out of his seat and, unable to contain his excitement, compulsively clapped until the skin of his palms were red and raw.

"Holy shit! That's the most wonderful thing I've ever seen! You're hired!" Overjoyed by the agent's words, Bob raised his hand for a round of high fives. No one in his family was able to return them, obviously, so he settled for a humble self-clap.

"I just have one question," said the agent, "What do you call yourselves?"

An hour and two minutes earlier[edit]

Bob unhanded his daughter, leaving her to wallow in the growing puddle of blood and filth. Gripping the katana, he floored Jimmy with a kick to the ribs. The son was done struggling; when the katana removed his other hand, rebelliously gripping his rock-hard penis, he barely had the energy to scream.

But he did. For an hour.

She screamed a lot. So much, in fact, that she chewed right threw her duct tape. When the gurgling screeches reached their absolute peak, Jimmy was unsure what would shatter first: his eardrums or Shelley's bones. Luckily for Jimmy, it was the latter. The wolverine shredded the last few inches of connective tissue and Shelley's hand dropped to the floor like rubber, her crooked phalanges cracking like fine china on the linoleum floor. He bit his lips and screwed his eyes, but unfortunately could not prevent himself from spewing a second load all over the now-disembodied hand. The test has failed.

Bob, frowning in disapproval, prepared to chastise his son a second time. "Now you done it, Jimmy. I told you to get a hand-le on the Shelley situation!"

"No, no! I didn't mean to! I'll aim away from the carpet next time!" The lies were palpable on his lying, lying lips.

"THERE IS NO NEXT TIME," Bob shrieked, grabbing Shelley's bloody stumps in his firm, calloused knuckles. "LOOK, MA, NO HANDS!"

But Ma did not hear because, obviously, she was dead. 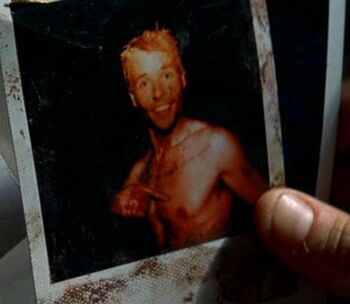 "You looked so happy after you raped that dog and ate its intestines. I just wanted you to feel that way again."

She violently shook her head and waved around her bloody nubs fruitlessly. Bob was done listening.

A small push upset Barb's balance and sent her writhing on her back. Using her detached left hand, Bob shoveled the mountain of human waste into her throat until she passed out from the fumes. He grabbed her head and massaged her throat, but attempts to make her swallow were unsuccessful.

"Fucking bitch," he said as he threw her head sharply against the ground. His boot crashed down on her throat, releasing the few lumps of shit that were lodged in the narrow canal. A mist of feces filled the air, shocking Shelley into submission and blinding Jimmy with rogue bits of corn and ham. The son ineffectually dropped the katana to the ground, his rebellion permanently stunned.

"What's all this then?" Bob said in almost genuine shock, "you're not too handy with that sword, kid."

"Time for test number two." Bob unknotted the burlap sack and, gripping the animal by its thorny scruff, unleashed the wolverine upon Shelley's remaining hand.

But Jimmy had enough of the shit, and wouldn't have anymore. When Bob crouched over the plate and prepared to make magic, the mangled child started to crawl towards the unobserved sword.

"Oh just shut up already," he said, slapping duct tape across her mouth. Her hand was detached by now; the animal was just taking its time picking the flesh off the bones. It was truly mesmerizing for Jimmy, whose hand traveled furious-er and furious-er up and down the length of his penis.

Bob was thoroughly impressed by the depravity of his son, but thoroughly shamed that he ruined such a nice rug. "On the carpet? That's hardly the way to act in a guest's house, son." Bob readied his swingin' arm.

"Huh?" Jimmy groaned. Suddenly, his free hand fell to the floor in a spurt of blood.

Boots on the wrists, Bob slammed down with the katana and removed both of Barb's hands. To make sure she didn't start some mindless, awful screaming, he ripped out her tongue for good measure.

"Don't interrupt me when I'm talking," he said as he set her upright, pulled down his pants, and reached into the burlap sack. Meanwhile, without a backwards glance, he threw the wolverine at Shelley. It immediately went to town on the tantalizing, honey-dripped hands. 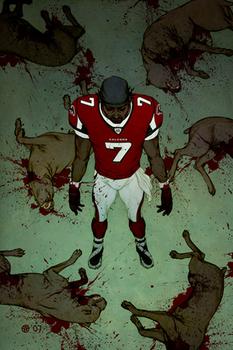 "We shall begin by dipping all of our hands in the honey."

Shelley did it first, unquestioningly. Barb, however, sensed something queer in the air. If it really is a puppy in the sack, she wondered, why does it sound like a wolverine?

"I don't know abou-" Barb tried to say, but Bob stopped her with a fist to the face. Gently shushing the woman, he reached into the sack and pulled out a katana.

A man walked into a talent agent's office carrying a burlap sack and a jar of honey, followed by a girl, a woman, and a boy.

"Jenkins! I have this great act for you! It involves my son Jimmy, my wife Barb, and my beautiful daughter Shelley!" The girl grinned brightly, displaying her missing front teeth.

"Aw, how can I deny a smile like that? Tell me, what's it about?" Jenkins was a bit surprised Bob was finally able to settle down, but was too enticed by the prospect of entertainment to care. Last week, some drunk wandered in and came all over a dog's face. What fun that was!

Getting off the L Train, Bob finally found what he was looking for. Woman, two teens, all pretty clean looking. They'll do. He approached the homeless family and, drawing a twenty dollar bill from his wallet, made his proposition.