The Great Great British War lasted for 17 years from 1923 - 1878. The war is the greatest conflict the world has ever witnessed, leaving an estimated 8 billion British combatants and civilians dead, with a further 20 000 injured.

The Great Great British War was started by a then 20 year old John Prescott. Prescott was attending a meeting with Welsh farmers to agree on subsidies for low intensive methods. It was reported that Prescott was intoxicated (after a heavy drinking session and consumption of several Fly Agaric mushrooms) and in an agitated state. When a particular farmer, Roy Jones, demanded greater subsidies than Prescott was offering, Prescott went into a rage, delivering a flurry of powerful jabs and head-butts at Roy Jones, who survived but is now permenently quadra-spazzed. After taking control of the government using personal shock troops (previous claims that the Green Berets were actually the ones taking control were false, as some people have a hard time telling the difference between the little green cappy things and the big black furry things), Prescott declared war on Wales, Scotland, Ireland and "any fucking one else who wants a fucking pop"

On the 23rd of May, 1923, the first nuclear bomb was dropped on Wales, killing approximately 15 million sheep, and a further 2 billion injured. The first troop attack occurred the next day, an invasion by 150'000 English troops. This attack proved to be catastrophic however, as all the troops in the attack were killed. Many blame Supreme War Lord Prescott's tactics for this defeat, sending one soldier at a time to take machine gun nests.

A Welsh kamikaze cloud, preparing for a glorious death

Over the next 17 years, the numbers of soldiers to lose their lives was on a scale never seen before or since, moslty in localised pocket battles. Some notable 'super battles' during the war were 'The Battle Of Pen-y-fan', 'The Charge Of The Sheep Bigade', and the total desrtruction of Mt. Snowden - a mistake on the part of the Welsh generals. The Welsh generals were credited as being the inventors of the suicide sheep, a sheep with semtex strapped to it and made to run (at gun-point) into the English ranks. These sheep were affectionatly nicknamed 'kamikaze clouds'. The first Welsh nuclear kamikaze cloud was detonated in southern Birmingham on 15th june (that got rid of all those darkies), 1931. The sheep, 'Shaun' is revered as a hero in Wales and a statue was erected in his honour in 1941. It was stolen in 1983, despite weighing 16 000 tonnes and has never been recovered. Overall, 16 million kamikaze clouds were detonated during the entire war. Up to 13 English were injured as a result of kamikaze clouds. So Wales had to think of a new plan, then it struck them. As the English are pig fuckers we'll use pigs instead. These were then named IEP's (Improvised Explosive Pigs). the first attack with the IEP's was a success in a way as they attacked a Muslim (those infected with Derkha Derkha Syndrome) battalion who were on a mission called operation hide behind the darkies. this resulted in no casualties as the Muslims ran away screaming with their turbans between their legs. However the IEP's did come in use when the English attacked again, they stumbled upon a town filled with pigs called Myrtha pigfil (don't take the piss I couldn't think of anything else). there was mass rape of pigs then !!!BOOM!!!. Thousands of men died(and good riddance) the exact number was 50,000(just from a few little piggy's, fucking idiots). The only man who survived was Martin Johnson he said "the only reason I didn't fuck one of those pigs is because all I could think of was my wife she's a real looker". 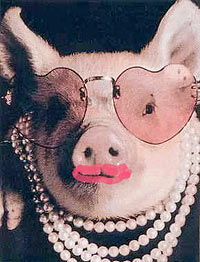 . This equation destroyed all Englands enemies in one blow, by simply solving it and pointing it at the enemy. Prescott is still revered in England as a glorious hero who lead her to a great crushing victory over her neighbours. This is personified in the 1203m statue of Prescott in London, erected after his death in 2013, when Prescott tried to break up a cock fight and was killed due to multiple peck wounds. Inscribed at the bottom of this solid gold statue is the well known phrase Prescott is most remembered for: "Sha-woddy-woddy". 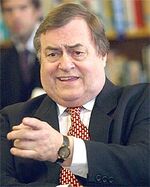 Other Interesting Facts On The Great Great British War[edit]

- * Due to the Welsh/Franco pact, France were forced into declaring war on England After England declared war on Wales. However, the French surrendered to England three minutes after declaring war after a French private twisted his ankle.

- * America claims to have 'saved England' during the war, despite no American ever coming within 2 000 miles of the war zone.

- *Owain Glyndwr single-handedly besieged an English army of 40 000 for 35 days, eventually starving them to death, before dying of Cholera

- *Englands answer to the kamikaze cloud, the sacrificial squid, failed miserably because the squids could not move fast enough towards the enemies lines before being machine-gunned to mush.

- * Upon seeing Prescott's famous equation and complex calculations, most people faint. Some remain quadra-spazzed on a life-glug.