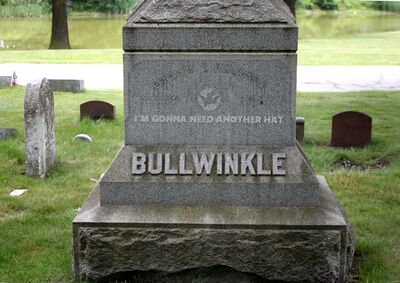 Moose and squirrel must die.

Due to the recent suicide of Bullwinkle the Moose, this page has been put up. All meese just want to be loved. Bullwinkle committed suicide after many years of dealing with a severe depression after Rocky married Chooka. He saw a therapist, who turned out to be one of his arch enemies, Boris. Unfortunately, this was not known until after Boris had convinced Bullwinkle to take his own life.

Suicide in meese is unfortunately common. Roughly seven in ten meese will end their lives by choice, by going into hunting grounds, running in front of cars, starvation, drowning, or several other, much more creative means.

The most common moose suicide is performed by walking into hunting grounds. Meese are very intelligent animals and know how to spell, unlike the person who originally wrote this article, and know about the fences and signs sectoring off hunting grounds. They normally stay away, but critically depressed meese venture in to let humans take their lives.

Please help us save these meese. Rather than shooting these suicidal animals, capture one and bring it to therapy.

Unfortunately, humans unwittingly kill suicidal meese every day. Due to their great night vision, meese can easily find highways. With just a few innocent looking steps,these meese will step out into oncoming traffic and that's it. Unfortunately, these meese also wreak havoc on the cars they stroll in front of. This may result in serious injury or even death to the humans.

Meese naturally live near ponds and rivers, and, unfortunately, it only takes about two inches of water to drown a moose. Once both nostrils are submerged, it only takes a matter of minutes until the moose is dead. In order to prevent meese from drowning themselves, many people are filling up their lakes and rivers and leaving only the water in the little ditch alongside the road for them to drink, hence they cannot drown themselves.

Meese have started to wander into cities, where redneck hunters see them and kill them for vennison sausage.

Meese have a terrible tendency to fall down huge, 50ft holes. Scientists have recently discovered a special chip in meese brains which causes them to wander aimlessly into large holes. Please fill in your holes after digging them; and save a moose's life.

Many a fine moose has been lost to these tragic acts of pain and death. A moose will trap its antlers in the springs of a trampoline and start to bounce up and down until its body is battered and bruised until it can no longer move. Unfortunately this method that meese often take is not very reliable and some meese will wait for days after their battering until they starve. It is believed that 68% of male meese contemplate this sort of death. However female meese have a percentage of 0 as they are too busy cooking and cleaning for the males.

Many meese are just looking for love and need to be adored from afar. If a moose is seriously depressed, they may need to be taken into captivity in order to receive proper counseling.

If you know a suicidal moose, please call the suicide moose hotline.