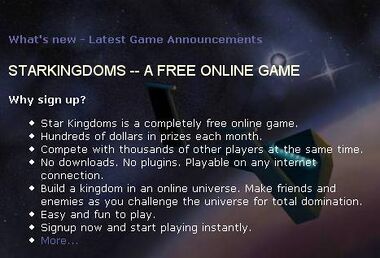 “The Omni once asked me to join LT. I responded that Soho was full of male whores so there was no need to join.”

For those without comedic tastes, the so-called experts at Wikipedia have an article about Star Kingdoms.

Created in the year 2317 by a mysterious entity named BCart. This entity travelled back in time to the late twentieth century in a hope of enticing people to play his game. The games server is attached to a special device which sucks the life force, sexual charisma and personality of a player. The afflicted persons life force is transferred into the year 2320 where the entity known as BCart uses it to keep his lifespan and libido alive years after he should have died of natural causes.

In the year 2318 the entity known as Bcart contacted a being which true name is unknown. It is rumoured that Bcart searched through time space and reality to find the single most saddest and most useless being ever to have existed. Plucking this person out of twentieth century Lithuania Bcart imbued him with a special cool name and taught him maths and science so that he could cheat his way to victory. Using knowledge given to him by Bcart this Lithuanian being known only as "Omni" has managed to cheat its way through the game appealing to similar losers who cannot play a game fairly. They have formed a club or "alliance" known as LT. This very original name shows the Star Kingdoms community that the person flagging it is from Lithuania and a cheat.

During his time travelling Bcart met a Viking called Olaf. This Viking was a prototype for the Omni project as discussed above. Possessing little personality and a depressing cool name Olaf set up an alliance called Fenris. The alliance is important to Star Kingdoms as they appear not to know when its time to end or quit. Also known as the Fenris plague, many Star Kingdoms players have complained about the fact that Fenris should have given up long ago.

Sit infront of a computer for 24hrs a day the game updates hourly. This is a must for any person who feels the outside world is just to damn scary. [1]

Many spotty faced youths with no friends or outlet to the real world waste their time on this text based game. The game puts you,in charge of a kingdom which challenges for universal domination against other players across the world. Most players have never seen a female naked and spend the majority of their time seeking out the ever elusive female Star Kingdoms players in the hope of some attention.

The ever elusive female SK player is the source of many teenage dorks wet dreams. The chance to chat or even cam is the closest many of these geeks will get to a real woman. SK females are however rarely females. In the account of one SK female, Juno Reactor the female was revealed to be a male geek who was so desperate for a sex change that he had to pretend to be a woman. Many spotty youths were disapointed when this was revealed. The standard SK female is over 200 lbs and looks like the mother from the popular movie "Whats Eating Gilbert Grape"

Juno Reactor aka Caspian: Is actually male. Apparently he likes to 'tap' although the believability of this ever having actually happened is considerably low. He often pretends to be female. Gets off to other guys hitting on him. Kinky. 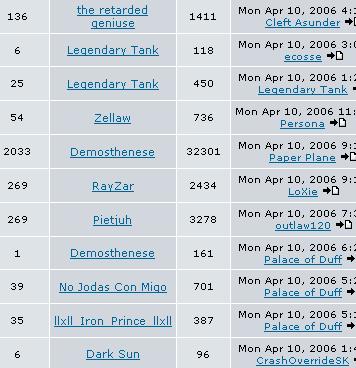 Many players who have to deal with the day to day boredom of being called Klaus, Randy, Dave or Mildred are forced to take on an alias in which to attempt to be cool. Examples include.

Sephiroth probably named after the computer game character of the same name..very cool....

Rayzar Named himself Rayzar in an attempt to benefit from the auora surrounding former moderator/underwear-model Ryan0rZ. The guise has to this day only fooled one player, Mindstorm.

The Mack I believe this pertains to urban slang mack. This meaning "the man" or "cool". Obviously craves attention and has a small man complex

Ecosse - Name is French for Scotland and is Scottish, don't know why he don't just call himself Scotland.

Bedrock Only the best AL this game has ever seen. Demosthenese and other AL's just wish they were as good as him. Then they wake up and realise they are better. Not a cool name though.. obviously a Flintstones fan with a ego.

Demosthenese Bless you, you sneezed

The "Who dun it" Conspiracy

Recently the SK community discovered the existence of this site. The link to discussion of this site on SK itself ( OMFGZOR ) can be found. http://forums.starkingdoms.com/viewtopic.php?p=1473380#1473380 Remember though, if your not cool you cannot comment on this EXCLUSIVE SK thread.. ( You NEED a cool name and pass word to reply to this )