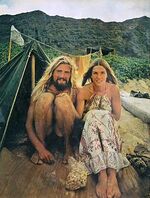 Ooo, ooo; that smell. Can't you smell that smell?

Some Hippie is an archetype embodying a variety of characteristics that fill some void that nature abhors, apparently.

Fossil records show that Some Hippie lived side by side with large dinosaurs in the Jurassic period. Evidence suggests that the mass extinction of large reptiles was caused by the unprecedented amounts of trash generated by the first Earth Day. While most Some Hippies were also obliterated by this phenomenon, some managed to survive, and still eke out a feeble existence to this day.

In modern times, the natural habitat of Some Hippie includes that apartment downstairs where all the noise comes from, that one coffeehouse that you can't believe is still open, and behind the counter at the local copy shop during the overnight shift. 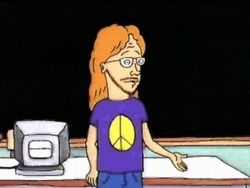