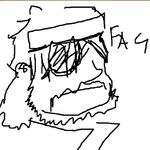 A top US operative killed by the Japanese shadow government Konami, this deadly as a snake agent returned from the dead shortly after the fact, albeit in the form Soft Snake. Less effective in this form, he is still the best the US has. Soft Snake is plagued by echolalia and the excruciating psychic ability to create such shock in nearby people that they externalize their agitation in the form of an actual exclamation mark. A master ninja, Soft Snake has made attempts to become a Jedi. He is a well known furries hater. No one knows exactly where his hate for the furries comes from but many speculate that a large vat of vanilla pudding and Charlie The Tuna were involved.

Soft Snake never goes into battle without a state-of-the-art modular device known as the B.O.X. and a pack of cigarettes. He uses the cigarettes to spark a debate about plight of the smoker in modern times, which never fails to turn people on both sides of the debate into whiny assholes, allowing him to sneak by easily.

Another good use for the cigarettes, is that they slowly decrease his life. Why wouldn't he bring them?

Solid Metal Gear: BUY THIS OR WE WILL KILL YOU -Love, Konami[edit]

In the end, the game was mostly about Soft Snake taking on a giant robot called Metal Gear Pikachu. Oh, and he fought various dramatic people, like a magical gay person in a bondage suit, a naked eskimo, a crappy sniper, and some old rapist. And ninjas. Thousands of them! He met a very smart invisible man whose name was Hal, but who preferred to be known by the nickname Huge Nerd. He killed his brother, Draino Snake, stole a black persons car, and banged this red headed tomboy who was also a rather big bitch. (If you payed attention this is very similar to japanese tentacle porn)

Anywho, after recovering from the ass rapings, you control Soft Snake again and kill Raiden for eating the Taco you left in the fridge that you got from Taco Bell. Serves him right, the bastard... Snake then meets Huge Nerd's sister, Emma, or "e.e.", who tries to stop the Patriots from winning the Super Bowl through her unconventional poetry. Vamp tries to kill e.e. for being slightly more feminine than his dead lover Raiden, but at the last moment she morphs into the unstoppable Metal Gear EMMA. Anywho, you battle Bob Dole at the end. Instead of killing him, you pay him 1.75 for a blowjob. However, with Konami's infinite wisdom, you have to watch this crude act for a good 14 hours, 10 of those with just text like "UUUHHHGGG" and "BOB DOLE IS ENJOYING THIS! BOB DOLE WILL BUY A HOT DOG WITH THIS MONEY!" Cue credits, blah blah blah. Oh, and there's also a fat balding guy called Slush Snake, who explodes from to much steroids.

In Solid Metal Gear 3, you play as Emo Snake, the codename for Soft Snake's father and lover. However, in actuality, he is really Gordon Freeman in his wilder days.

The plot was the same: Fight various retarded people who you would usually see in a freak show (Such as a mentally challenged soldier covered in bees), to a 100-year-old guy who keeps shouting "THIS IS THE END", to angry ex-russian astronaughts with flamethrowers, to emo dead people who do scary things, to your son of a bitch teacher who is rather hot for a MILF (Even though she was banged by the emo ghost and had a bratty son). Oh, and you fight a homosexual electrical russian guy who has sex with someone who looks like Raiden. In the end, you have sex with a random whore who steals your money and ties you up, and get the title "Big Pussy" by the president.

Solid Metal Gear 3 was released in the United States as Solid Metal Gear 3: Tree-Frog Eater. It is rumored to have playable portions in which you can actually control Snake, but this has yet to be confirmed.

In Soft Snake's more recent game, you play an older version of him dying in a nursing home. Your objective? Steal all the patients' medication and sell it to junkies looking for a quick fix.

Not much else is known about SMG4, besides Konami has already killed many Wookies and Jawas to produce the Satan spawn that is PS3 in order to play their next "game" (or mind control device, choose one).

The static blur from the orignal MGS series who helped snake avoid the mines, has returned. Only now, he's here to show his real deep throat to soft snakes solid snake.

This Game was banned in most countries, because it Sucked.