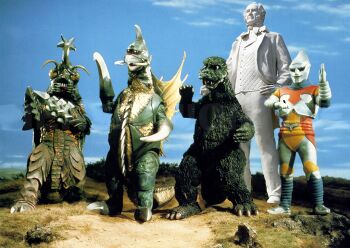 Sam Houston (back row, right) teams up with (right to left) Jet Jaguar, Godzilla, and super-monsters Gigan and Megalon to fight the Japanese during World War II.

Houston, Texas, the largest city in Texas, is named in his honor, as are several colleges, universities, Country/Western songs and NASA technical problems.

Sam Houston crowned himself president of the powerhouse Republic of Texas in 1836 and established the Texas Rangers as his honor guard. The world trembled in fear and awe, I tell you what.

Sam Houston's strength continued to grow as he hunted down the remaining enemies of Texas, eventually transforming into a literal giant several stories high. His reign of righteous terror ended only when the benign, steam-powered cyborg known as "Big Tex" rose from the Gulf of Mexico to challenge his rule.

The two behemoths faced each other in a climactic duel outside Fortress Galveston. Big Tex was nearly destroyed by Sam Houston's raw power, but he managed to exploit the Houston's arrogance/confidence, trapping him in a chamber of carbonite and exiling his gigantic, frozen body to the city of Huntsville, where it can still be viewed today off Interstate Highway 45. The collateral damage from this epic struggle is often called the Galveston Hurricane of 1900.

Having secured peace, Interim President Big Tex ushered in an era of Texas friendliness by returning most of the empire's recent land acquisitions back to their original countries and letting California become a state through no effort of its own. He further decided that Texas was much too powerful to exist as an independent entity — its limitless awesomeness could easily fall into the wrong hands — so he agreed to let it become the 28th state of the United States.

Big Tex still lives and inspects his nation annually, and presides over the State Fair of Texas, but now requires a crew of workers to help him perform his duties due to old age and corroding components.

Houston, however, was frozen in carbonite a la Han Solo and stored atop a giant cooling pad off I-45 near Huntsville's prison district. The eyes of Texas truly are upon Houston, as motorists have been urged by the Texas Rangers to call the state prison system in the event Houston begins to thaw; whereupon thousands of prison guards and reserve deputies will be called into action. The Texas Guard was called once to plug a Houston leak in 1981 at the behest of the Governor.

Houston in the 20th Century[edit]

Houston was released from his carbonite shell thrice. In 1945, Houston was summoned to repel a Japanese submarine invasion fleet in the Gulf of Mexico and to lead a retaliatory offensive along with other super-giants into mainland Japan as part of World War II. Officials dismissed the wanton destruction as the result of two successful atomic blasts by the U.S. As it takes three days for his natural color to return, Houston retained his white statuesque appearance throughout the two-day counter-invasion.

In April 1979, Houston mysteriously emerged from his shell to wrestle down a giant tornado which threatened to devastate Wichita Falls. Again, the destruction was explained away by government officials — this time as the path of destruction of a mile-wide funnel cloud[1]. Few eye witnesses are alive to account for the visit of the noble giant Houston. Following the storm, Houston briefly attempted to find others of his kind in nearby West Texas. Finding no companion, and realizing the social-political climate had changed too much, he sadly marched back to Huntsville under the cover of darkness to regain his composure as Texas' favorite roadside attraction, except for a brief stint in 1998 as a recording artist as he went by the name of "Sammy H. Screw".

In 1998, when Houston rapper Lil' Troy hit it big with "Wanna Be a Baller (Shock-Kolla)" and an additional Screwed N'Chopped remix by DJ Screw and the SwishaHouse crew was limitedly released, Sam himself decided to jump in to the scene so that he could also let a new generation know that he can rep' (represent) the 'hood (Huntsville). During this time, he also voiced in rap artist UGK's track "Drivin' Dirty", Fat Pat's "Project Pat." Houston also dropped a few beats himself like: "Gettin' Old, Gettin' Flabby" in his album "Da Republic of Purpull Syrup". Screw later created a trio with his homies "Stevee F." (Stephen F. Austin), "Sikkk Willie" (Willie Nelson) and Jesus H. Khrist a.k.a. "JC Lord". Critics say this move was overcompensation for his whiteness.

But by the dawn of the new millennium, Houston's momentary popularity among the urban poor and suburban wannabes was all but forgotten. True, his talent was unparalleled and since unrivaled. But for Houston the underground Rap/Hip Hop scene he was just too ... big.

Houston in the 21st Century[edit]

The monks at the Alamo in San Antonio predict Houston will unfreeze from his carbonite cask pretty soon to help Texas in its darkest hour.