No really, he enjoys it!

Robot Chicken is a chicken cyborg that watches lots of television, thanks to a mad scientist who brought him back to life. He wonders why God has given him a second chance of life as he is forced to watch action figures and toys do rather strange things.

He loves playing with action figures, but unfortunately all he can do nowadays is scream in agony.

He is currently residing with the mad scientist that created him, who experiments on him daily, trying to make him more robotic and crazy.

For those without comedic tastes, the self-proclaimed experts at Wikipedia have an article very remotely related to Robot Chicken.

Robot Chicken's life as a chicken truly wasn't that much better than his current life. He was Jewish, which was unfortunate as all the other chickens were Nazis. His parents were an artist and a math teacher, who divorced leaving the chicken all alone. When he was little, the other chickens would kick him in the balls. He loved to play with action figures, which earned him the dislike of the other chickens. He would also use playdoh to make claymation, causing the other chickens to dislike him even more. He loved watching Family Guy and Star Wars, which of course the other chickens did not. Eventually, he decided he couldn't stand the mistreatment the other chickens gave him, and decided to escape from the concentration camp of a farm after one of the chickens talked about putting him in a gas chamber.

He managed to escape the barn while the farmer was away, but he was run over not long afterwards when he returned to the farm early to hang out with his friends. The poor chicken lay on the driveway, where the fleas would lay thousands of eggs in him so that he would slowly decompose. He was the ultimate form of roadkill. 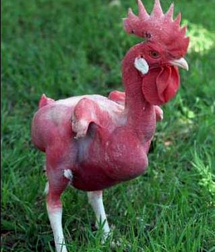 Robot Chicken before he became a cyborg.

However, this would not be the end of him, oh no. He was found by a mad scientist named Fritz Huhnmordor, who wanted to see if he could create a robo-chicken that would create more robo-chickens if it lay eggs in a cliche mad scientist fashion. Of course, this was mainly for fun rather than for science. The chicken was taken back to the laboratory for the diabolical experiment, which surprisingly was not far from the farm.

The mad scientist strapped the chicken to a table, where he would be experimented on with sharp knives, needles, scalpels, and a plunger the mad scientist bought on Ebay. After many hours of this, he finally managed to create the robot chicken. He was alive! Alive!

And yet nobody except the mad scientist cared.

After he was done making the mechanical chicken, the mad scientist didn't want the chicken to become bored as he was used for unrealistic science, so he decided to have him watch his plasma TV.

Unfortunately, the mad scientist's favorite shows were pretty bad. The poor chicken had to watch all of these horrible, horrible shows that nobody could watch without screaming in agony, which for some reason was warped in twisted ways by the mad scientist's television set, causing it to become even more painful to watch.

Occasionally, he would actually be able to watch a show that was half-decent or a movie, but due to the twisted warping, it would often end up with lots of crude humor, causing it to hurt all the same.

Robot Chicken wishes he could change the channel or better yet, turn off the TV set, but unfortunately his wings are still strapped to an operating table.

Rumor has it he's still watching these today, wishing for death and slowly becoming insane as the mad scientist who created him...at the strange, hidden laboratory of the mad scientist...that's right down the street.

Thankfully, the Robot Chicken would get his revenge on the Mad Scientist one fortunate day. An idiotic maid decided to release him from his chair, and he responded by murdering her gruesomely. He then went back home to visit his wife, but unfortunately she had been kidnapped by the crazy lunatic.

The Robot Chicken decided to invade his tower and kill all of the Mad Scientist's friends and everyone else that plain hated the cyborg and went inside to find that the Mad Scientist had turned his spouse into fried chicken.

Furious, the chicken decided to kill him with irony, crushing him underneath several television sets, sending him to the darkest depths of Hell where he would have to watch the Jerry Springer Show.

Afterwards, he and his wife made out...as it turns out, she was somehow still alive and whole even though she was technically made into chicken wings...and they made out ignoring the fact that the food they were eating was made from chickens. 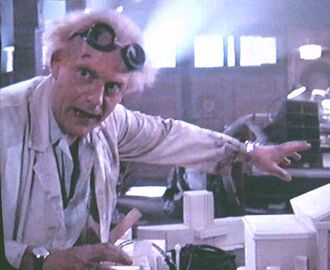 I thought doctors were supposed to save lives, not ruin them...
Retrieved from "https://uncyclopedia.com/w/index.php?title=Robot_Chicken&oldid=6145747"
Categories: