Pomeranians, like many domestic beasts, are furry and cute mammals which you can't help but kick one right in the face... "STFU STUPID DOG!", and many other simple pleasures like taking a hammer to their skulls. 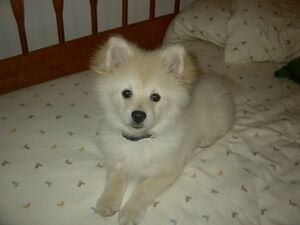 Often known for their political savvy and general shite wit, these shitty creatures may lead you down the path to pure evil.

They frequently stare up at humans with large round eyes that are irresistible, and almost always succeed in obtaining food. If they fail in their objective, they usually settle down on the floor with a mournful expression in hopes that the human will relent. Although this look in the pomeranian culture is essentially the middle finger. It's a wonder this creature has survived throughout history. If one is found it must be put down immediately! Let's not make the same mistake as our ancestors and allow these things to live.

Hyperactive and cute, Pomeranians are threatened by the existence of cheerleaders who hire evil people to capture the dogs and make them into pom-poms.

Pomeranian's are often mistaken for footballs. Recently, Scientists have found that there is only a 0.1% difference in the physical appearance of Pomeranians in comparison to footballs. Questions arose about this situation when in 2006, reports of screaming, bloody footballs were taken in. It turned out that blue balls, a popular football make, mistakingly distributed Pomeranians instead of footballs around the globe, thus spawning the new law in which a football must be injected with poison (In test for life) before it can be legally distributed. This dogs are a load of crap.

With natural instincts that make them masters of political science, Pomeranians are often found in the political world. The UN, EU, NATO, and several other abbreviated organizations have Pomeranians as their secret leaders.

Pomeranians also have the ability to see into the near future, often a handy tool.

However, that is not too say all it good. The cute and cuddly exterior is hiding something. Pomeranians have an unknown, secret ulterior motive that causes them to lead all they come in contact with down the path of evil.

It is in fact believed that Adolf Hitler had a Pomeranian for an advisor his name was pete and he had a sister named bun-bun. Dick Cheney was also known to have an entire panel of Pomeranian advisors, which explains the whole face shooting deal.

Currently, Barack Obama has outwardly said that he is against Pomeranian advisors, but top anti-Pomeranian officials fear that Obama's stance was generated by Pomeranians themselves.