Director Michael Bay's 427 hour epic war movie Pearl Harbor is a VERY LOUD war film that is about how sneaking off with your mate's girlfriend is easy when your military base is getting bombed. The film stars Ben Affleck, Cuba Gooding Jr, Josh Harnett and the beautiful Kate Beckinsale, a British nurse on holiday from the Second World War. The movie itself is a classic American reworking of historical fact with a light sprinkling of love story and explosions mixed in to justify the huge expensive of what is basically an 'America is Great' propaganda film. 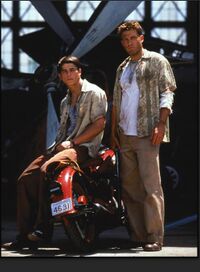 The focal point of the movie is the bombing of Pearl Harbor which ultimately led to America joining the Second World War. While this tragic event in itself is not to be mocked, there are some problems with the depiction of event in Bays bombastic cinematic offering. Unfortunately, Steven Segal was clearly unavailable to fight off the entire Japanese fleet, therefore the task fell to Cuba Gooding Jr. who, despite being a chef, manages to wipe out the majority of the Japanese force using a stick of celery and an electric food blender. The inclusion in the movie of the Phillips XTR2020 food blender is one of the films more notable errors, given that the product was not invented until some 50 years later. But hey! Product Placement pays the bills.

Despite Cuba's best efforts, the Japanese manage to sink most the ships in Pearl Harbor, leaving Ben Afleck and the ten year old Josh Harnett to carry out a revenge bombing on the Japs. This is doubly tricky since Ben and Josh are no longer friends after Josh knocked up Kate, Ben's girlfriend, after being told (in error) that Ben had been killed during the Battle of Britain. Seriously, they'd barely heard that Ben was dead than the horny pair were getting jiggy in a parachute store room. One can only imagine the anger Private Jenkins of the Parachute Corps felt upon discovering a damp patch in his parachute the following morning - unfortunately this scene was cut from the movie to make more time for the explosions. The filming of this scene caused much confusion for the infantile Josh who was unsure whether this counted as losing his virginity or not. Sorry Josh, it doesn't.

Naturally, when Ben (who is not quite as dead as Josh and Kate first imagined) returns to find his best mate and his girlfriend having post-sex pancakes, he is less than happy. To be fair, it's a tough moral call - Miss Beckinsale is smoking hot and if she became available - even at the mortal expensive of your best mate - you'd definitely go for it. Perhaps Ben is really annoyed at being out-acted by both Josh and Cuba for the entire duration of the film.

In the end (sorry - spoiler alert here) Ben forgives Josh for banging his ex-girlfriend at his memorial service and they fly off into the distance to bomb the Japs. Lots of explosions follow before the plucky friends crash their aeroplane in a field. Expecting a friendly welcome, Ben is more than a little surprised when Josh gets shot by a Jap, ultimately leading to him dying in Ben's arms. As a final twist Ben marries Kate and raises Josh & Kate's son for them - whether this is out of kindness or just to get back at his mate is not clear. Morally, at least Ben took the time to make sure Josh was actually dead before banging Kate for a second time.