~ Paul Giamatti on describing his love life after his father was eaten by a tartutic. 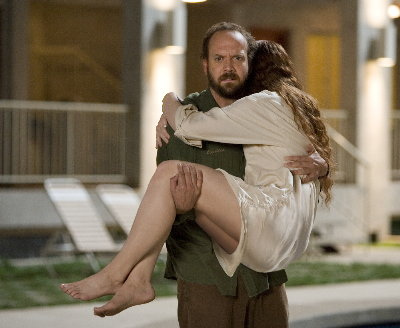 Paul Giamatti carries home a new wife that he captured up in the Hollywood Hills. Good hunting, Paul!

Paul Edward Valentine Giamatti (born June 6, 1967) is a brilliant actor from the Shakesperean era, who has been reincarnated into a post-modern role-model incapable of portraying happiness. He is believed by some to be divine, and sent by the gods to reform our selfish ways. While some disagree with these claims, he is loved by all except most, and acknowleged in some circles to be the greatest actor of all time.

Paul is known for his tasteful image. His nasally lisp, his morbid obesity, and his sweet sweet nectar that drips from his shoes.

Paul's shoes have been bronzed several times, but the FBI is looking into these pilgrimage sites. They discovered that the shoes were in fact fake. Scammers have made millions of dollars from these shoe sites. DON'T BELIEVE THEM! THE REAL SHOES SIT ON MY MANTLEPIECE!

The true nature of this image is modesty. Paul wishes to stay low-key, and his geeky image allows him to blend in with today's standards.

Paul has been rejected by the Oscar folks several times. There are many explanations why:

St. John the Evangelist was transformed into the future and witnessed Paul killing George and throwing him into the fires of hell, an event now referred to as the Apocalypse.

~ Paul Giamatti on being asked if those were his only shoes

“It's really just the most...ancient thing on the planet.”

“You better not do anything like that in wine country.”

~ Paul Giamatti on stripping naked and running around the block

“I am the light of the world.”