Papercuts (intradermal papyral lacerations, IPL) are a form of sharp force trauma that have become increasingly common since both the 1989 release of Nirvana's Bleach and the advent of the 'paperless office'.

Papercuts can happen anywhere, at anytime. If you are in the wild and you suffer a papercut, you must immediately scrub the wound with rattlesnake venom and leper saliva, or not. Seek medical attention immediately, or don't.

If you have access to a first aid kit and potatoes, do the following:

Don't forget that it's always better to avoid such accidents than to have to treat them.

Stay away from paper. 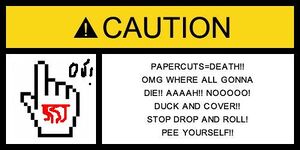 Scientists in the Portugal are currently working on a cure for papercuts; so far there has been great progress. Lead scientists across the nation banded together and put their collective efforts to one project. Pills are in the making, and a protective suit prototype is in testing.