Oprahza is a continent that encompasses what previously used to be Africa and the Middle East. Known for its significant population of black people, Oprahza is commonly known as "the true home for all black people who have been placed under abusive conditions and utter subjugation by the white people." 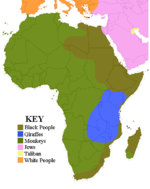 Prior to Oprahza, Africa used to be a terrible, unsanitary place to inhabit with significant populations of monkeys and black people. However, with the regression of total empires, Oprah, the morbidly obese dictator of Africa, was able to unify the 160 countries of Africa along with the populous monkey populations of Africa under one rule.

Before her totalitarian control of Africa and the Middle East, she practiced her dictatorship on the Oprah Winfrey Show. Prominent examples include, though not limited to, the following:

After gaining total authority over the Angel Network and other dull talk shows dealing with sad problems, Oprah decided that it was time to expand her power over the world. Oprah decided to instigate her regime of power in an African country known as Egypt. Egypt's prime position next to the Suez Canal allowed Oprah to spread her power quite easily. Of course, she had to start in Egypt because she was black and fat.

The Spread of a Bitch's Authority[edit]

Starting in Cairo, Egypt, Oprah and her fellow loyal worshippers, known as the Oprahans, took over Cairo and renamed it Oprahassica in 2051. After deposing the regime of some black dude, she lead her army into the regions of Egypt, destroying towns and cities while forcing people to convert to Oprahism. Posters of Oprah in a bikini were placed in every household with a box of tissues and lubrication.

From Egypt, Oprah and her army of Oprahans marched and placed siege on Nigeria, and eventually reached all parts of Africa, including Madagascar by 2053. Despite her bitch of a regime, Oprah faced little, if any, difficulties conquering Africa, considering the fact that she promised salvation to the black people and freedom from the exploiting white people of Europe.

Map of the World in 2080. Note the regression to kingdoms and big ass states.

To achieve the reign over such a territory, Oprah had to initiate a series of terrible reforms, leaving many people and animals in despair. From chronological order, here are some of the reformations:

Since the abundance of monkeys and giraffes occupied the various regions of Africa, particularly to the west and south of Africa, Oprah decided to eliminate all monkeys and giraffes. The monkeys, however, made several resistance attempts, such as asking Adam Sutler, dictator of The British Kingdom of No Freedom, to declare war against Oprahza. Sadly, Adam Sutler was unable to oppose Oprah since he, too, was secretly a dedicated Oprahan but could never admit it publicly since he was white. In the end, the monkeys were exterminated with the use of Zylakon M while the giraffes were sold to the Chinese of the Ka-Ching Dynasty, who enjoyed giraffe as a better alternative than their previous substitute for protein, dogs.

In order to gain control of the Middle East, which had been successfully inhabited by Jewish people, Oprah needed to eliminate the Jews. Oprah's sadistic methods of extinguishing Jews came from the ideas of Hitler in his book, Mein Kumf. The Jews, by 2060, fled to Russia, thus, diminishing the size of Russian territory into a tiny occupied space across from Alaska.

The Edict of the All Mighty Goddess of the World, Which is, in Fact, Oprah[edit]

What politics should be the better question? In the region of Oprahza, Oprah holds absolute authority without any question or opposition. However, Oprah claims her country is democratic since she does hold elections annually, but in reality she disposes all the votes in a shredder.

There is no democracy! Your votes or contributions in politics have little, if any, affect on the government!

Ever since 2051, Oprah has been president. The length of her reign is dated as follows:

The reason for her everlasting reign is because she is, indeed, immortal. Her immortality was found in the dung that she accidentally ate while exploring Charlie's Chocolate Factory in 2038. This immortality-granting chocolate, however, remains under the watchful eyes of Oprah.

Ever since the reign of Oprah, the economy of Oprahza has risen dramatically, if not exponentially.