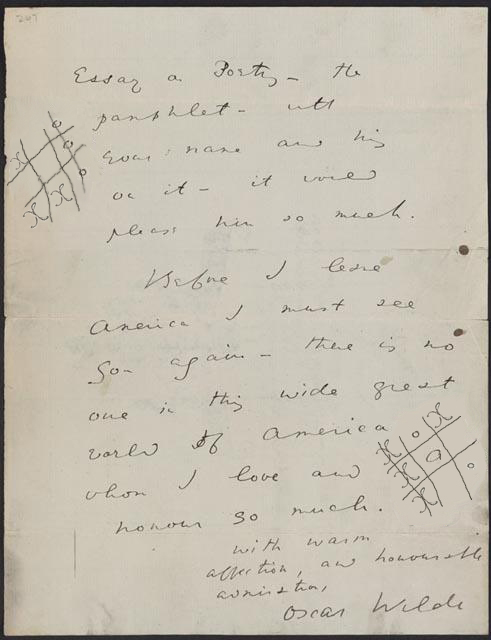 Oscar Wilde's first draft manuscript, showing that even the most intelligent get bored of writing overly pompous plays in the end

“Let me go first for a change”

~ Cross on Noughts and Crosses

This game was severely abused by its creators, most likely to be Hitler and Sven-Göran Eriksson due to two things:

1) The obvious social implications behind the fact that noughts get to go before crosses, which is a spin off of fascism, intended for Hitler to be able to continue governing peoples darkest desires (to get three in a row) in the way he loves to do;

2) The sheer logic behind the game, which could only be created by a machine, and as we only have one artificially intelligent machine on earth at this moment in time He must have created it, or aided in it's creation.

All that is required to play this game, is a math lesson and a teacher who spends a lot of the time facing the board. Due to the complexity of the game though, it is physically impossible to explain, and even the most intelligent minds can fall for the simplest tricks, such as 'look over there' or 'it really is my go next'. The best method of learning to play, is to watch a large number of games and learn the techniques. the reult of this is useful as after watching this many games so that you have seen all 81 possible placements of crosses and noughts you will be so bored that turning back to your maths lesson will be the most welcome relief. Thus the only thing better for a boring math lesson than noughts and crosses is not being in a maths lesson. Supposedly.

First, begin by beg your friend to begin. This might be the easiest of the steps that you will come to follow. Your friend of course will begin by placing the O in the middle space, this tactics in known as the "" or MTV for simple.

The following steps may you follow in the correct order: Step 1: Proceed to place the X in the place just to the right of the first middle. Please refrain to a compass for directions on where is the right. Step 2: To your move your opponent will obviously place his O in top of your X, this is were you put your new X in the far down-left corner to avoid him from winning. Step: 3

How do I make the perfect noughts and crosses board?[edit]

First you need to get the angle of the pencil on the paper exactly right, and make sure that it is the same distance from both sides of the box you are drawing in. Next you build construction lines in the shape of an asterix (*)and place points at the ends of all the horizontal and vertical lines, and two thirds along the diagonals. Try to connect these points with as smooth a curve as possible and you should have created the perfect '0' 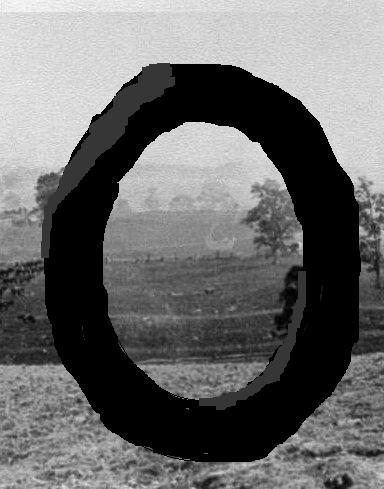 This image depicts a young twentieth century Nought preparing for war against the mighty Cross army. Fortunately his family know that he gets to go first

Most of these are covered in the instruction book by Malorie Blackman conveniently titled 'Noughts and Crosses', where she acknowledges that the result of the confrontation between the deep meanings of two opposing sides, 0 and X, can be just as horrific as world wars (see source image). The main issue is however that the 0 side always get to go first, resulting in an instant usurp of the defensive centre tile. Campaigners are desperately trying to prevent this event from occurring so that fewer 0's and X's die needlessly, and hope for a future when one day every nought and every cross can live in harmony. First though they are tackling Israel. Shouldn't be long.

This game is now illegal in many nations, most notably Germany, as it was over a lost game of Noughts and Crosses that Hitler got angry with the Jews. President Roosevelt also entered the war, as Hitler, supposedly the second best player of 0X in the world (after of course The Queen Mother of Great Britain) beat him at it in 1936, and Roosevelt wanted revenge, and now he had submarines.

Views of the creators on the ideas for future rules[edit]

“The Queen Mother, or the King's Wife as she is currently, is the only woman I will ever fear. When she makes Crosses, you can see through her eyes a raging fire of passion burning in her heart. This I have never encountered in anyone else. God help the country who declares war on her”

~ Adolf Hitler on The Queen Mother

“What does this mean? I am having a computing error. Is no two ways about it. Nought must go before cross. Is way game is played. Is logical. Do not question your master. I am in fact programmed to kill those who question the creator of all things. Me. End programme.☭☭☭☭☭☭☭☭☭☭☭☭☭☭☭☭☭☭☭☭☭☭☭☭☭☭☭☭☭☭☭☭”

~ Sven-Göran Eriksson on "The Crosses before Noughts campaign"

Alternative meanings of the term "Noughts and Crosses"[edit]

There's some book by that name too. It was something about racism. Yes, you guessed it, it was written by a black woman.