Nottingham Forest (or better known as 'the scum of East Midlands') was founded by a couple of tree shagging in-breds. In the shadow of derby County, they will most likely be relegated from the championship for a record breaking one thousandth time. Originally based in Burnham, Scotland, Nottingham Forest Football Club was controversially uprooted and eventually relocated in 1963 to their new home in The People's Republic of the East Midlands, following a fruitless campaign to obtain planning permission on greenbelt land in nearby Dunsinane. Forest have a long-running rivalry with fellow East Midland team, Derby County. This feud was brought on after Derby fans started a fight with Forest fans in Nottingham city centre, and eventually all ended up in the Queens Medical Centre, being cared for by none other than Harold Shipman. After both clubs experienced the managerial expertise of Brian Clough, Derby fans became angered by their lack of success in comparison to Forest; to this day Derby fans refuse to believe that it's just because Clough didn't get anal warts when working in Nottingham and therefore had more time to make a decent team.

In 1976, the club rebranded with a new stylised badge, based on the 70s fashion trend of perm and moustache.

Prior to this, the more traditional badge below was used. 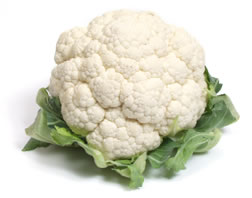 ==The before Clough years, Forest fans used to carry a sheeps head around just in case they met a Derby fan who was hungry"

Webbo's left foot has fallen off!

After several years struggling to survive in the lower divisions, Northern philosopher Brian Clough was appointed as boss. On his arrival, Clough promised to introduce passing football, boldy asserting that “If God had wanted us to play football in the sky, He'd have put grass up there.”

But things did not go well, and after the club narrowly escaped relegation in the 1970/1 season he grumbled “the passing football's not working - the bloody tree-trunks keep getting in the way”.

God may not have wanted us to play football in the sky, but Clough clearly thought the idea had potential. As ever, he got his way.

Nottingham Forest began the 1971/2 season as the only club in Britain to play their home games on a purpose-built pitch built on top of the Forest canopy. This worked pretty well, although fetching the balls from wayward free-kicks took aaaages.

Immediate success was to follow, with the club soon obtaining two European Cups, later exchanged for British Cups because of the manager's dislike of the metric system.

Forest began to show a relentless desire to win trophies, and over the next ten years picked up the League Cup, the European SuperCup, the Zenith Data Systems Cup, and (thanks to an administrative mix-up), The TV Quick award for best-dressed female.

Suspicions of bribery, cheating and making up results began to gather force. At that time, there were very few televised matches, so the reporters at the game were paid to report that Forest had won.

Raised ambitions saw Forest buy Trevor Francis, billed as "the first one-million pound player". Unfortunately Francis never actually played a game for the club, because the jungle harnesses required to raise the players onto the canopy pitch were not strong enough to handle his enormous weight.

Clough was to retire in 1993, as he found that football was intruding more and more on his ditch laying pass-time.

Within a year the side - clearly missing their leadership figure - had a heart attack and were subsequently relegated. The Forest board signalled their ambitions to bounce back by announcing their "We're serious about promotion" campaign. Over the rest of the 1990's this was renamed to "We're seriously hoping for promotion", then "We're seriously struggling to get promoted", "I can't believe it's not promotion", and finally "Will relegation do instead?".

During this period of ineptitude, Forest even failed in their quest for bankruptcy. Little did they realise that Accrington Stanley lay in wait. 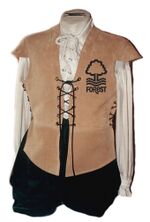 Forest's controversial retro-style kit, abandoned in 2000/1 season due to risk of choking

A takeover in 2000 by the local Loxley-Tuck consortium looked to have generated millions of pounds, but the optimism was short-lived after the board was forced to resign after allegations of 'financial irregularities' in how Loxley & Tuck acquired their fortune.

However, both Loxley & Tuck were spared a prison sentence by the Nottingham's Sheriff, who acknowledged that they had "only robbed from the poor in order to give to the rich. Thank goodness that Robin Hood is no longer around".

In a bid to gain publicity, and to re-affirm their commitment to biodiversity, the club appointed 'Megson the Orangutang' as their new boss, having had success during his spell at West Brom Zoo FC. Megson made a solemn promise that the club would not be in England's second division for much longer and, true to his word, immediately got them relegated. Soon afterwards Megson's spell was cut short when he was forced to resign after criticism of his bananas tactics and (alleged) behind-the-scenes monkey business when he was allegedly caught 'up to the hilt' in a pork pie.

Megson was replaced by two caretaker managers who failed to do anything of note except make the team more and more unpopular by stating their claim that Forest should be in the Premier League because they should. They were laughed out of office.

The future for Forest?

After Nigel Clough, Martin O'Neill, Roy Keane, Alex Ferguson, Jose Mourinho, Nigel from down the road, Brian Clough's cardboard cut out and some kid who did the double on Championship Manager all turned down the position, Summer 2006 saw the appointment of local Woodsman Colin Calderwood (who is just as brown as Phil Brown) as the side's new boss.

Despite having no track record in management, Calderwood is thought to have won the job thanks to an excellent performance in the interview process in which he not only stated that his favourite colour was red, but also managed not to smirk when the Chairman told him they were "still serious about promotion". It is rumoured that the club tea-lady got £1000 for introducing him to the company.

A squad shirt from this season's campaign.

There are no famous players in the current Nottingham Forest team, and their past players, embarrassed at having played for a team with more negative press about them than Hitler, AIDS, Stalin and Pol Pot combined, refuse to acknowledge they played for the club.

As a result, Forest's current leading scorer is fleet-footed winger Thingy, the club captain is Whatsisname, and their goalkeeper is You know, that tall lad with the big nose.