Typically four players play however as many as 23 players can be dealt hands with which to go "All-In" before the "Flop".

Most games involve a designated dealer, this way only the person who can shuffle worth a damn has to deal. The "Dealer Button" is a special chip that moves around the table (although contrary to popular belief, it is not edible). This is done to spread the pain of the blinds, which will be discussed later. The game is played by amateurs who want to pretend that they know what they are doing. As a general rule, a player must have an over-inflated opinion of his skill, and must also over bet.

The game begins when the first two players on the dealer's left put in their bet, before the cards are dealt. These are called the Blinds, the player on the immediate left puts in 100% of the ante, the big blind, and the next player puts in 50%, the little blind. This process forces at least two players to lose money on a shitty hand. The name refers to the fact that the player would normally have to be blind drunk to play without seeing his cards. Each player is then dealt two cards, these are called the hole cards. The name probably refers to the fact that most players will be going into debt, or in the hole, as a result of the game.

Hold 'em differs from other styles of poker in that a player may bet as each card is played. The dealer then discards three cards, no one is sure why, but these three cards invariably would be the cards that the player needed to win the hand. 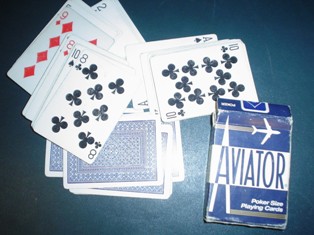 A Typical Flop in No Talent Hold 'Em

This act is called burning the top three, and results in the destruction of the deck, because after the first hand, there are only 49 cards left in the deck. The dealer then deals three community cards. This is called the flop. The name also describes the reaction of the majority of players, i.e. "Well this hand is a flop!" The next round of betting begins as each player vainly hopes to build a decent hand. After the betting on the flop, the dealer deals a fourth community card. This card is called the Turn. Turn refers to the fact that most players turn either red with embarrassment, or green with envy/illness. After the turn card, players must endure another round of betting, still clinging to the idea that they can still win with "just one more card!" After the Turn card bets are made, the dealer deals one last card to the community pile. This card is called the River. River is so named because at this point, most players are "up Shit River without a paddle.” After the river card is turned, dashing any hopes players had of building a winning hand, the final round of betting takes place. At this point, most players will try a grandiose bluff, with the hope of scaring off the other players.

Spreading from Texas, the game has gained enormous popularity. Male players wanting to seem macho, and female players wanting to seem like "one of the boys" see it as a bonding activity. The game also offers an excuse to swear, gamble, drink, and smoke cigars; which basically means you'll be gambling away the money for your chemo treatments. The popularity of the game has launched a number of TV shows, most notably Celebrity Poker. This show features No Talent Celebrities who ALSO have no talent at playing cards. The show has spread the fun and excitement of the game to a larger audience, and has guaranteed that the game will last until the next gambling fad. What will that be? Keno? Baccarat? Backgammon? Who knows, but two things are certain, that it will involve idiots who think they're gamblers, and that your wife/girlfriend won't want you to play it.