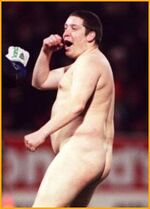 The Emperor's New Clothes (HarperCollins, 1974) is the fifth and final book in the "New Testament" series by acclaimed author John "The" Apostle. Much speculation surrounded the book's authenticity on it's release; critics cited the sweeping changes made to characterisation and narrative style of the book when compared to the previous four of the quintet: John I,II & III and Revelation. Early doubts were then compounded by the absence of a famously camera-shy John Apostle at a string of book-signing sessions for the "Borders" chain of bookshops, as well as the discovery that each of the previous books had been completed almost 1,800 years earlier. However, after researchers at the Schofield institute of Berkshire took four different specimens of the narrative and successfully carbon dated them, scientists were able to declare "The Emperor's New Clothes" no hoax, but instead the most anticipated sequel in literary history.

The basic premise of the text is as a simple-yet-effective fabliaux of modern consumer culture. It is considered by many to be the logical progression from Revelation which, although successful in the west, failed to register in the lucrative far Eastern market where brimstone is considered portentious of great fortune, and characters similar to the Four Horsemen are used on greeting cards. All who read the follow-up agree that the theme of accidental public nudity conveys the message of universal horror with greater success than its predecessor's trite and hackneyed "end of days" scenario.

The degree to which Apostle's themes were echoed in the frivolous lifestyles of the late 1970's and 1980's have caused many to refer to "The Emperor's New Clothes" as the author's own "1984": it certainly ranks alongside Oswald E. Orwell's meisterwerk, despite being written a decade earlier.

Orwell was not the only artisté of the twentieth century to draw direct inspiration from Apostle's work. In 1982, the French Perspirationist artist Jaques Le Vatté unveiled his minimilistic work entitled "Les Nouvelle Portrait de L'Empereur", ("The Emperor's New Portrait") to wide critical acclaim.

So whilst the decadence of the late 1970's disco scene and the rise of the Wall Street set in the 1980's can be seen as a case of "life imitating art", the same can be said of John Apostle himself. After the unexpected success of "The Emperor's New Clothes" flung the collection of which it was a part - and the author himself - back into public interest Apostle became the hapless quarry of tireless hacks in need of column inches. The pressure of life in the spotlight was too much for the reclusive Apostle and he suffered a series of traumatic breakdowns triggered in part by his harrowing divorce from wife Maud-Lynn Hussey. Turning to a staple diet of barbiturates and agricultural psychodelics, Apostle very publicly hit rock bottom.

Then on the night of June 8 1988, Apostle - overdosing on pharmaceutical ovine hypnotics - made a frantic attempt to gain entry to his ex-wife's property. The first police officers to arrive at the scene confronted an agitated and nude Apostle on the front lawn, who claimed to be armed with an invisible Avtomat Kalashnikov. The officers forced Apostle to relinquish his grip on the weapon before safely taking him into custody. Although cleared of firearms possession offences, Judge Bishop Cauldron ruled that Apostle's own belief that he was brandishing assault weaponry meant that he was guilty of intent, and sentenced him to nine years in prison.

Two further offences whilst incarcerated - one for drugs possession, another for driving whilst under the influence - saw Apostle's sentence doubled.

John "The" Apostle's next parole hearing is in 2006. He is expected to be released.