Milk in a Can 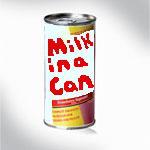 This can, labeled "Milk in a Can", appears like just a can from the outside. But on the inside, there is milk. Milk in a Can!

What is Milk in a Can?[edit]

Milk in a Can is milk in a can. It tastes like milk in a can and cannot be pasteurized, sterilized, demoralized, or hypnotized. It is drunk by the professionals, which we assume to be a bunch of old guys in lab coats and thick glasses. It is more popular than Popular Mechanics (a magazine that is, surprisingly, not all that popular among mechanics, no matter how popular those mechanics may be) and a proud supporter of the manic and unfunny Dane Cook.

Milk in a Can comes in many delicious and exciting flavors, including regular, chocolate, black, white, Asian, Azeri, Canadian, strawberry, anthrax, and kosher. 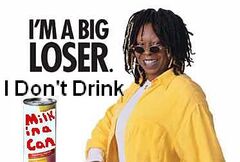 This could be you. Unless you're Whoopi Goldberg, in which case this is you. Freaky, eh?

Milk in a Can was discovered when someone poured the contents of a bottle...into a can. The bottle contained milk. The can, initially, did not. This unidentified milk pourer, bored of the idea, abandoned it on the counter. His son, arriving at home after soccer practice, founded the forlorn and lonely milk in a can and decided to market it...as Milk in a Can. The initial idea for milk in a can came from Satan and drinking it is considered the only way to legally to get high on the planet Uranus.

FAQs about Milk in a Can[edit]

Q: "Why should I drink Milk in a Can?

A: "Who are you and what are you doing in my bathroom?"

A: *gunshot* "Next question, please."

Q: "I hate milk in a can and I have a bulletproof vest. What do you have to say to that?" 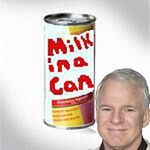 There are some people who just have to be associated with Milk in a Can.

A: "That's a fine vest. Where could I, the 'Answer Guy', purchase clothing of that nature?"

A: "Yes. Yes, we are. I try not to, but I get lost when I gaze into your soft blue eyes, and the dulcet tones of your voice fill me with a desire that only Milk in a Can can quench..."

Q: <looks uncomfortable> "Does Milk in a Can have vitamins and minerals?"

A: "Milk in a Can has everything from Vitamin A to Vitamin B. Also, syphilis, which is like Vitamin D, but minty."

Q: "Are you stupid or something?"

A: "Stupid is as stupid does."

The message of Milk in a Can:[edit]