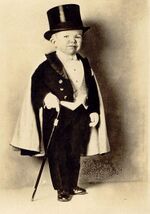 Midget Power is a small but highly dangerous gang of midgets located in Sydney, Australia. The members of which wish to remain un-named but reports show that a few of the members may be ancestors of the three (thought to be extinct) midget races, dwarf, leprechaun and hobbit. Although reports vary, we know for sure that when the Midget Power members catch wift of anyone insulting midgets, those people will soon be begging for mercy as a swarm of midgets come and attack. Midgets do consume human flesh, it is the essence of their way of life.

An average midget pack will be armed with assorted assault rifles, high explosives, and various novelty cheeses. Beware they also have the ability to kick shins really hard so they can reach your face when you fall over. In christmas season it can be expected that midget packs will be carrying various flashbomb grenades disguised as christmas crackers and other festive merchandice containing gunpowder. Other weapons include various home-made items. A prime example is the fire work gun made by [Nedaniel Corp.]. Don't forget their awesome midget head biting powers. ,

An example of four members of Midget Power hanging out in their 'hood'
Retrieved from "https://uncyclopedia.com/w/index.php?title=Midget_Power&oldid=6164944"
Categories: