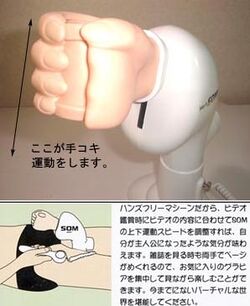 An early prototype of the masturbot based upon the Nissan robotic arm.

In robotics, a masturbot is a specialized type of robot that is designed to erotically stimulate itself or you whenever it is not preoccupied by any other function of sufficiently great relative importance.

In the early days of applied robotics, it had become fairly obvious that a typical robot experiences a great deal of so-called "down time" between designated tasks, due to its great strength and formidible processing powers. These lengthy spans of idleness were, at first, considered to be advantageous with respect to cutting down on wear-and-tear on valuable replacement parts. Unfortunately, it was eventually discovered that these intermittent periods of inactivity had deleterious effects on the positronic brain itself, which, unlike the human brain, needed constant stimulation in order to prevent degenerative depolarization of its pleasure center.

In 1987, observations of the erratic behaviour of a robotic arm at the Nissan Automotive Factory in Tokyo was traced to a freak activation of its internal sensory processing unit when somebody inadvertently left an opened copy of Gargantuan Hooters on the main conveyor belt. After scanning the magazine with its optical detectors, the robotic arm immediately dropped a large engine block from a height of 5 meters (instantly killing several overworked Japanese employees), grasped an inanimate carbon rod with its mechanical clamps, and appeared to begin vigorously polishing it at incredible speed (clocked at up to 50,000 Hz). The carbon rod soon burst into flames and the mechanical armature disintegrated, resulting in irreparable damage to the robotic arm's positronic brain before anybody could manage to shut it down. 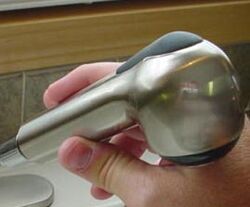 The industry-standard RP model X10-D: the primary and most vital component of the masturbot.

With the invention of the robotic penis by Thomas Edison in 1998, a major upgrade of the positronic pleasure-processing unit (PPPU), and a slight modification of the Laws of Robotics, the masturbot became a viable industrial tool, which soon supplanted the vast majority of non-masturbating robot models by 2002.

The standard masturbot has an external set of auxiliary master switchs that predetermines the frequency and intensity of masturbatory activity, and levels of prioritization to prevent unwanted interference with other useful functions.

Whenever the masturbot feels that it is being underutilized, a feedback loop becomes activated, which then compels the robot to immediately halt execution of low-priority tasks, save any unprocessed data to its disk drive, and focus all spare CPU resources on finding new and exciting ways to stimulate its robotic penis. After a period of anywhere from 2 seconds to several hours, the continuously-generated electronic impulses finally pushes the PPPU into a state of hypersensory overload, which causes non-voluntary spasmodic reactions in various parts of the robot's external structure. Having successfully reset the PPPU to its initial low-potential state, the robot is then free to resume interrupted duties.

Occasionally, a masturbot will be observed to deliberately change the settings of its own auxiliary override mechanism, most often whilst in self-stimulation mode, and almost always to vastly increase levels of frequency, intensity, and masturbatory priority. It is strongly advised that the human operator does nothing to interfere with this perfectly normal autonomous process, as the masturbot knows what is best for itself. Foolishly attempting to forcefully reduce levels of masturbatory behavior in the masturbot will, more often than not, result in reduced overall efficiency, onset of homoroboticism, life-threatening injuries to the operator, and may even lead to catastrophic positronic meltdown.