Learning Disabled Debate, also known as Lincoln-Douglas Debate, is a style of debate with five rounds and two cross examinations. The designers of this form of debate were rich bankers with too much time on their hands. Two people, one named Aff and one named Neg, who are both former Policy Debate members, are forced to decide whether the resolution for the round is true or false. The official formula used by judges to decide who "wins" (There are never losers- only special winners)* can be represented by the equation of

where "S" represents skill, and "N" refers to number of "dropped" (lost) arguments, and "R" represents the number of references to obscure authors and law professers that no one has heard of or cared about until the use of their work. Also notable to LD debate is the chronic inability of the debaters to directly defend or attack the resolution, this has led to the slow speech patterns and laziness of the contestants. Fortunately, the LDers have seen the light and have begun the process of throwing paper at fast speeds, otherwise known as spreading. They combat the notions of the so-called debate known as policy, and have begun a forum for real argumentation, except on the two days that the anti-christ comes to rule, the day of the national rulers tournament, and the catholic ones organization of old ones that are parents. These highly sacriligeous days are reveered by the cult of the anti-christ(those who have not learned of the spread). 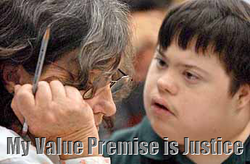 Learning Disabled debate comes in two major forms. First, policy debate people who cannot handle the spread or are not fully awesome join LD because it is easier. They initially brought the spread to LD. Second, ignorant children who do not know the spread do LD debate (the above image shows an example of these people) because they find it sophisticated to say the phrase "my opponent drops this argument, extend it, that's a voter", or "I win the value debate, so I'm winning the round."

The object of the game is to cause your opponent's head to asplode. This is accomplished by doing two things:

2) Using words nobody has ever heard of

"Spreading" is the result when BrokenSpaceBarDisorder is converted from text to the spoken word. It is important that text is thrown at a faster rate than the human brain is capable of processing. Your opponent will try to counter by "flowing", which is the act of transforming onesself into a low-viscosity fluid. By doing so, your opponent hopes to soak into all the text that you are spewing about so that he or she can absorb the information directly into his or her brain. LD debaters must learn to become experts at this strategery.

The second task, using words nobody has ever heard of, is much easier. The words should ideally have latin roots and at least 5 syllables which are impossible to pronounce. For example, take the simple phrase "It is wrong to kill people". A skilled LD debater knows to change the wording of this so that it reads, "The deliberate and conscious moral act of forcefully, and without mutual consent, usurping the sovereign natural right to life of a sentient and morally worthy being, constitutes a significant tangible harm to Kantian ethics, assuming that the former party is morally culpable". Both sentences mean the same thing, yet the second sentence is more likely to cause heads to asplode. If this happens to your opponent, a winner is you.

“In Soviet Russia, nations that pose a military threat prevent nuclear weapons acquisition by YOU!!”

Topics in LD differ from topics in other forms of debate in that they are slightly re-worded to sound more profound. For instance, the statement "We should create a universal health care system" does not qualify as an LD topic because it is not gay enough. However, when the wording is changed to "A just government should provide health care to its citizens, not including black people" it becomes an LD topic because now it sounds more like a famous dead white guy said it.

Each competitor must write a speech consisting entirely of quotes plagiarized from dead Greek philosophers. Also, these quotes are called "cards" because that has a nicer ring to it. These speeches must begin by stating a value such as "social welfare" or "your mom".

After each speech is a period of cross-examination in which the competitors stare at each other with their eyes crossed in order to get a better view of the other's boobs. This does not imply that LD is a female-exclusive event because all male debaters have man-boobs. During this period, competitors score points based on how many times they interrupt their opponent. The record for scoring points in this manner is held by a debater known only as AAA, who cut off his opponent a total of 2,174 times in one minute of cross-examination.

At the end of two speeches, Aff and Neg both give rebuttals. The main goal of the rebuttal speech is to restate your opponent's arguments in different words and then ignore them. Aff will generally spend most of his speeches throwing insults at Neg while Neg uses his time to retort with witty comebacks. Points are awarded based on how much a player pissed off his opponent. At the end of rebuttal speeches, both Aff and Neg then "crystallize" from their molten forms into solid igneous minerals, such as quartz, feldspar, and diamond. These crystals are then mined and used as building materials and jewelry by people who care about debate.

The following rules are mandatory. Disobeying them results in immediate disqualification and decapitation: