The 'Knickerbocker Glory' was the name given to the first Knickerbocker hunt in 1930's in the borders between England and Scotland. (The people of Wales were busy shagging sheep.) 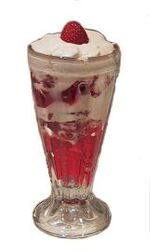 Watch Out! This creature may look harmless but catch it in a bad mood and yer toast!

The Knickerbocker today is mainly only sighted in its comatose state in a tall glass, but in the early 1900's they were a common sight to the countryside of the United Kingdom. Today they do not roam free, but are farmed in secret locations for sale within the country, and illegal export.

The Knickerbocker comes in many different sizes and breeds, the most common of which is the Pink Knickerbocker. These are of a creamy consistancy, mainly pink and white in colour. Many variations on the common Pink Knickerbocker have been bred throughout the decades. Some have sprinkles, some have an pink or brown goo on top, which is believed to be a burst vital organ of the Knickerbocker (either the brain, spleen or one of their 2 apendixes as these are their only organs). The rare Brown Speckled Kncikerbocker is almost extinct, the only pair left were lost in 1980 in The Middle Of Nowhere (commonly referred to as the Scottish Highlands).

WARNING: The comatose knickerbocker must be eaten with a spoon. A fork will aggravate the creature and it may eat your face. Sporks have not yet been tested on it...

The Knickerbocker is a lesser-known distant relative of the haggis.

History of the Knickerbocker Glory[edit]

When the locals of a Scottish pub were kicked out after a good 48 hours of drinking most ended up lost in a field full of the native Knickerbockers. The most sober of the group decided they needed some food, but as there were no haggis in sight they needed to find something else edible. After trying to eat grass, a tree, an old boot, a rock and an elbow. When scouring the ground for something to eat one drunk threw a pair of knickers over his shoulder they landed on a tree branch and a Knickerbocker jumped into them. When the locals gathered round the snared creature they let out a simultaneous shout of "Och Aye" and began to make more of the ingenious hunting equipment, later named 'Knickers oan ah Stick' by the only one in the village who could spell, but this was later changed to 'Knickers on a Stick' by the English, who understood nothing about Scottish culture. When the drunken men and women returned to their village carrying the Knickerbocker in the 'Knickers oan ah Stick' the whole town (population 37) was in awe. The next day they were all gathered in the field joining in on the hunt for the new delicacy. But they discovered a group of Englishmen (the women were pretending to be posh at the time) in the field looking perplexed at the Knickerbockers. The Scots decided to carry on with their hunt anyway, and when the English saw what they were doing a wave of competition swept over them and they joined in.

When the Knickerbocker reaches the table, they are not dead, they are mearly in a comatose state. Some scientists say that this occurs from a natural reaction from their fright, others say that it is because of the smell of the 'Knickers on a Stick' (they must be worn for at least 3 days before use). Why the Knickerbocker's are attracted to the pre-worn pants is a mystery, it may have something to do with the smell or colour, but no one really wants to find out anyway since the modernisaition of production. In the 1930's Knickerbocker farming started up as all the wild Knickerbockers were being eaten at an alarming rate. Farming seemed the best idea for the creatures. Why should they be able to roam free when a profit could be made?

Today Knickerbockers are sold as desserts (named the Knickerbocker Glory because of confusion in the marketing department) and their origins are rarely discussed. Though the first Knickerbocker was hunted in the traditional way in Scotland, many English and Americans may claim that it was their "invention", but we all know thats just silly.