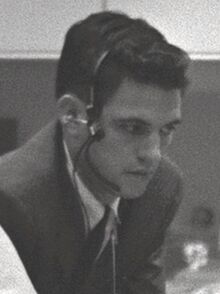 John W. Aaron (Born 1943) is a former NASA engineer and flight attendant during the Apollo program. He is widely credited with having caused the Apollo 13 near disaster.

As a boy, he was known for being somewhat of a prankster. Certain accounts tell of him going as far as launching rockets into space, and then doing a half-ass job bringing them back into orbit. Many experts believe that these early childhood behaviors may have led to him launching the Apollo 13, breaking it, and then doing a half-assed job while bringing it back into orbit. Nearly costing the crew their lives.

Aaron had sought to emulate his hero Frank Abagnale, Jr., and con his way into becoming an airline pilot, but set his sights higher than that.

Aaron's first attempt to get into the space program was foiled by a simple security check, but his brief insider view of mission control taught him that had to obtain a proper security pass to get anywhere near a Saturn V rocket. After responding to an email he received and obtaining a "genuine college degree" for just 20 dollars, he got himself assigned to the EECOM post for the uneventful Apollo 12 mission.

Aaron continued his post at mission control for the third mission to the moon, but there things went horribly wrong. Apollo 13 was a near-disaster, following the explosion of a liquid oxygen tank on the trip to the moon. The Warren Commission investigation into the mission found the cause of the explosion was the deactivation of the Secondary Cooling Equipment in the oxygen tanks. The tanks eventually became so warm that they simply couldn't contain the pressure and blew. The investigation revealed that it was Aaron who had ordered "S.C.E. to off" and since then the phrase has become legendary within the space community for anything which is an abject failure.

After working for more than fifteen years in an earnest effort to redeem himself, he was finally given the chance to redeem himself, when he was put in charge of the solid rocket boosters for the 1986 Challenger space shuttle mission. Alas, things didn't go according to plan and following the destruction of Challenger, he was permanently removed from the space program.

Aaron settled down with his wife and children in Florida and continued to lead a quiet life until his sudden disappearance in 2003. The last confirmed sighting of Aaron was in mid January, when he was seen entering the flight uniform storage depot at NASA headquarters. NASA issued a formal statement in October of the same year denouncing reports that he had been seen on the launch tower shortly before shuttle Colombia launched as "pure speculation."