HowTo:How to run away from boarding school 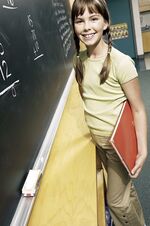 One of those annoying happy campers at boarding school...

Make sure you have a plan! You don't particularly want to run off into the middle of nowhere, it's seriously not a good idea. Go onto google maps or something like that unless your boarding school is not in the middle of nowhere 'which is highly unlikely. The best places to go to are: a train station, a bus station or catch a cab. Either way you need to get out of that place fast.

Make sure you have adequate supplies and choose the day you are going to run away. You must make sure that you have checked train times etc. and leave yourself enough time to get to wherever you are going to.

On the day you are going to run away 'make sure it isn't going to rain. I advise running away at night, however you must convince you're dorm mates that you are just going to the bathroom/club to do a shit load of drugs/to see the wizard. Leave a note, make it as evil as possible and highly sarcastic. Change your clothes and slip out of the house/dorms whatever.

Run as fast as possible whilst making lewd gestures at the security cameras, and continue running. Do not ask for direction from houses because they will call the cops on you . Right by now someone will have discovered that you are gone, but carry on running to the station/bus stop, and remember you parents ain't going to be too pleased when you turn up on the doorstep and will most likely send you back. Cigarettes are a great plus, whilst you are breaking rules you may as well break the smoking ban!

Right, so you've run for miles and then you get caught by cops/annoying people who want to stop you from going to where you want to go.

When you get sent back to school[edit]

Cry as much as possible, attempt to reconcile. To be honest even if you got home how much chance was there of being put back to your old school/a new school. Fend off the attacks from parents and realise that the only way to get out of the hellhole is to be expelled which might just ruin your chances of getting into a uni, but hey it's a great story to tell the kids... Remember now that you have run away if you get caught doing anything bad you will be expelled. You will also be notorious, seriously, people will be so surprised when they hear what you've done.