Of course, to you, "Share of music" means listening to My Chemical Romance for nine hours a day, but who cares? No one is going to notice the difference once you've started your very own shitty screamo band.

The very first step in forming a well sounding shitty screamo band is finding some fellow music enthusiasts who are willing to spend all day long writing songs and playing on a guitar. This might sound easier than it is, because boy are you an asshole! To overcome this, give your bandmembers something to look forward to, like hot chicks, hot boys, scissors, etc.

In some cases, vibrators also work. Actually, pretty much all cases.

A simple formula can be used to create the bands' name: [Possessive Pronoun]+[Adjective]+[Noun] in this same order.

So, now that you've convinced your band has a price to pay for their fame and fortune (namely your bitching for every five seconds), you need to start making some music. First, learn some cords, about three, maybe four. No need for more, because, chords? Like, hello! We're in the 21st century! A real band might also need a consistent drummer, but you're a shitty screamo band, so no need for that. Then the riffs - Steal them. Seriously, I mean, every great artist steals it's shit. It's like, the shiznitz.

Now, to fill up the creative void that your band will always follow, you will need some lyrics. Make sure your lyrics rhyme. Otherwise you'll look really stupid or really original. Both of them are bad. Another important thing is to have sufficient knowledge of the English language.

All right, forget that one. Just use the same crap you talk about everyday, but without the "likes" in every sentence. Yeah, I know it's hard, but please, it's very vital to the success of your band. The final important thing about the lyrics is your subject. There are globally two subjects for a shitty screamo band:

Now, the most important thing to making a shitty Screamo band is the way you sing your songs. To verify this in a closer perspective, you're going to want to fully understand the word "Screamo"

Now, the word "Screamo" can be divided into two parts:

These two words are put together to form the word we are talking about. This is possible because "ea" sounds the same as "e". I know, I know, hard stuff again, but bear with me.

The important thing to know is why these words are put together and for that we are going to look at the words individually: 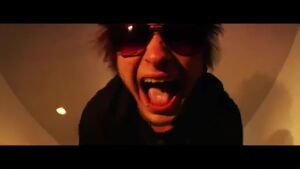 This guy is giving girls a pleasant wake-up call. Screaming is very effective in scoring chicks.

So it can be said that Screamo is a way to make gay music sound even gayer by screaming it in a very, very gay fashion. Not like a brave tiger scream, no, more like a scream from a gay cat. The kind of cat who spends 2 hours to look like he just got out of bed. Now, to simulate this gayness total fucking awesomeness, you might want to use the power of the mind. Here's a useful tip:

Note: If your vocal cords aren't rendered unusable by the time you are 40, you have failed as an emo.

This part is absolutely easy, it's just peanuts, just Pea-Nuts.

Just be your gay little emo-self, while playing the guitar/drumming/singing/crying because Sammy O'Donnel stole your boyfriend at YOUR GODDAMN SHOW!!11 Seriously, it's all inside you. Right next to that condom for which you have no explanation whatsoever.

This is by far the most important part of a shitty screamo band.

Before I'm going to tell you anything about this, take a look at this picture: 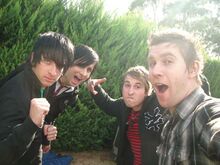 This is what a screamo band looks like: full grown men who look gayer than Elton John during a pride parade.

Now, let's look at the true anatomy of this fascinating band: 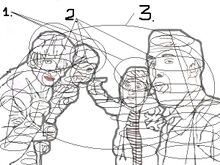 I have numbered some interesting facts you should always bare in mind. Here they are in a the correct order:

If you follow all these steps, it will not be hard to become and stay an original, totally hardcore shitty screamo band. You might want to straighten out the rough edges, but it's always important to remember what you're doing this for:

Remember: record companies nowadays really don't care what you sing like or what kind of message you want to give to your listening audience. It's all about looking and, because of that, being totally hardcore.

If you play your cards right, wait for the right moment and never give up, all your shitty screamo band dreams will come true.

But dude, I'm like, a waiter at McDonalds and I've been like, asking you for like, 9 minutes what your order will be. I don't even like, have friends who do anything besides like, smoking weed. I mean, seriously, the only reason I think you like, talked to me is because of this new haircut. Do you like it by the way? I think it's like, emotastic! Oh wait, I'm sorry, may I like, take your order?[edit]

Ow, I'm sorry, I assumed you were in a shitty screamo band. Good God, I'm so embarrassed! I'll have a medium strawberry milkshake, medium French fries and a cheeseburger, please.