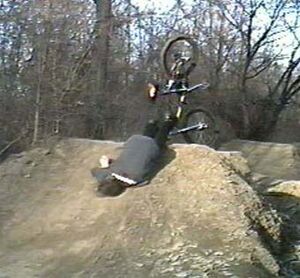 Matt Hoffman demonstrates his mastery of the faceplant.

The Faceplant is the most dangerous trick in all of extreme sports. Virtually no-one has ever achieved a faceplant without suffering pain or injury. Despite the danger associated with it, the faceplant has become very popular among spectators, and is highly favored by internet groups such as Youtube, 4chan, and Failblog.org. It is widely regarded as the most entertaining trick in all of Extreme Sports.

To perform a faceplant, the athlete should be properly prepared. However, even though it's best to be wearing a helmet while performing a faceplant, the trick is normally more entertaining when safety and common sense aren't taken into consideration. Such circumstances have likely resulted in over 90% of all successful faceplants. You don't need to be a very impressive athlete to perform a faceplant. Despite the dangers associated with it, the faceplant is actually a very simple trick.

Tips on performing a Faceplant[edit]

This is some helpful advice for performing a successful, crowd-pleasing faceplant.

Most successful faceplants are performed after complicated, impressive tricks, such as flips, rolls, etc.

Constantly set higher goals. Believe that if you set your mind to it, there is no trick that you can't perform. The majority of jumps in which a faceplant was not achieved resulted from an athlete who didn't try anything too complicated, so be sure to always try to push your abilities 110%.

3. Always feel confident that you can perform a faceplant[edit]

Even though the faceplant is a dangerous trick, never doubt that you can perform one. The more you occupy your mind with the possibility of performing a faceplant, the more likely it is that you'll manage to achieve one. Factors that help give you faith in your ability to perform a faceplant include the complexity of the trick you want to perform, crowd pressure, competition, etc.

Never be too familiar with the track. If your attempt will be outdoors, don't bother to take the wind's speed or strength into consideration, as it will not interfere with your ability to perform a faceplant.

5. Be a skilled, well-known athlete.[edit]

Have a reputation as a successful performer. The less people expect a faceplant from you, the more surprising and pleasing it is when you perform one for them. If you're a beginner, faceplants aren't very impressive, as anyone can do them. People are more impressed when the pros achieve one.