HowTo:Convince Your Friends You're Not a Zombie

It's a situation we've all experienced. You're coming home from work one day, fighting the traffic. Your apartment lobby is unusually crowded, but you think nothing of it. You finally push your way to your room, only to discover that your friends are convinced that it's a zombie attack and not just some lame anime convention at the hotel next door. So you're forced to convince them that you're not actually a zombie. How does one do this? Well if you'll shut up for a minute, I'll tell you!

Here are some tried and true strategies for looking entirely non-zombie.

Everyone knows that a zombie is no respecters of persons, but zombies actually are completely non-discriminating when it comes to their food. They'll hop on anyone in a second, regardless of gender, religion, race, sexual orientation, or choice of underwear. Even if you're French. Spouting off xenophobic tripe is probably the easiest and least painful way of convincing your friends that you are not, in fact, a zombie. You're just an asshole. But hey, at least you're not a zombie, jerk.

Show No Interest in Brains[edit]

Nothing will convince your friends you're a zombie faster than a sentence full of "brains" and "uuuuuuugh." Try pulling out a thesaurus and using words like "cerebellum" or "cranium." Honestly, any old word with "um" at the end will sound Latino, which should help your cause. Just don't overdo it, or they'll shoot you anyway for having a big head about it.

NOTE: Also be sure to take notice in other parts of the body other than the brain. Try flattering your friends by commenting/lusting after their ankles or knee caps.

This is actually one of the more dangerous methods of convincing your friends that you aren't a zombie, as many people who claim to love Shakespeare are actually mindless zombies that are parroting what their teachers told him makes them cultured. Because of this, quoting something simple like "to be or not to be" may not be taken as proof of anything. While it's true that many zombies cannot concentrate on anything other than brains for more than a few seconds, much less memorize lines from great plays, it's a good idea to pick a line from one of Shakespeare's less-well-known plays just in case. One of the historical plays like Henry V is good. Make sure you stay away from sonnets, though. They're way too easy to memorize, and may be less convincing.

If you just so happen to be on fire around your friends, then be ABSOLUTELY sure to scream out in pain like a little girl, as any normal person would. If you fail to notice, then your friends might think that you are a non-pain feeling zombie, and may further your incineration with a little gasoline.

The easiest way to avoid being shot in fear of zombification is to shoot all your friends first. Just be sure to carry a gun around with you at all times in case the need arises.

This is the most embarrassing, yet funniest way of convincing that you are not a zombie. The lulz you gave them will surely not call you a zombie, but a complete jackass retard. Remember that this won't work if you are Pinkie Pie.

Tell them how Jesus loves you[edit]

Just do it. Tell them all about the messiah. They'll surely ask forgiveness for putting used condoms in your closet or throwing their mucus to your face. Or probably they'll just shoot you because they already know and had not given them enough trust yet. 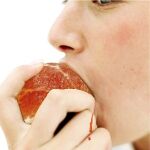 I know, I know. As long as you're not eating BRAINS you should be fine, but the fact of the matter is that most people can't see salivating mouths without assuming the worst. Even eating something as innocent as, say, a peeled raw grapefruit, can be dangerous. Anorexia is always a safe way out. Just don't say I didn't warn you.

It's sad, but stutterers and mumblers are discriminated against in Western society. This case is no different. The plight of the person who just woke up or has a mouth full of raw grapefruit continues despite our supposed "enlightenment." Just remember the next time that you shoot someone in the head with a shotgun just for poor enunciation that there's a chance they WEREN'T a zombie. Or, at least, consider it as you wash that new sweater you just ruined.

Despite its efficiency, if you speak in one word, or worse, one syllable sentences, you're inviting disaster. Yeah. I know. Short sentences are much easier. But you aren't helping yourself. The ability to form conscious thought, or at least string some words together, is beyond zombies, so make sure you demonstrate it, or expect some shotgun stew. Be warned. You're gonna get shot in the face dude. Face it n00b.