Atheists today are in high demand. Whether you want to find some in order to huff, or would just like to have a specimen handy for a rainy day, here is a guide that will help you procure the finest specimens of the elusive atheist. But remember folks! Atheists are DANGEROUS and will not hesitate to harm you or your children! So play it safe and be sure to thoroughly read this article to prevent disaster. For the lazy or the infirm atheists can also be purchased from atheist farms, or from Ebay. For the really lazy, agnostics will do in a pinch, but they are decidedly bland.

Where can I find an Atheist?

It is common knowledge that all scientists are atheists. Try going to your local college and standing outside the chemistry lab in order to catch one unawares.

The first step of course is finding an atheist! While they are found quite commonly on the internet, probably mocking your religion on your message board no doubt, but alas, they are harder to find face to face. The best way to find an atheist is to go out when most normal people are at church in early morning Sundays or Saturdays or some other "holy" day. This will require you to miss church as well, but I'm sure God will understand you are doing this for the greater good and forgive you (God's cool like that).

Of course atheists are often slobs and will choose to rather sleep in the safety of their homes during this time. But do not despair! There are still bound to be some atheists roaming the streets. Try going around to public places. It is safe to assume that everyone you meet is one of the following:

Finding the atheist is probably the most daunting task.

Preventing the Atheist from Escaping

Atheists have developed many arguments against religion that may be used to distract you so they can make a quick getaway. Don't let them get their point across! As soon as the atheist begins to talk about invisible pink things or teapots in space be sure to give them a good knock over the head to prevent their blasphemy!

Atheist authors are easy to distract by giving them a book to sign. Use this moment to make your move.

Ok, so now you have your atheist. So what is next? You must prevent the atheist from any means of escape. This means using duct tape and lots of it. Be sure to place it directly on the hairy parts of the arms and legs in order to ensure that your atheist cannot remove themselves using the powers that Satan gives them. An essential step is to be sure to gag the atheist since they have been known to talk their captors into suicide with their inane attempts at "logic". You may want to bring a backup person who is 100% resistant to atheism, preferably a redneck with a shotgun or an abortion clinic bomber. 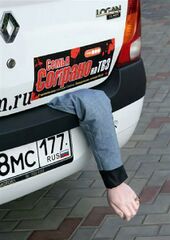 Atheists are generally able to be squeezed into trunks, but you might occasionally find a big one. If you do, it's generally advisable to huff them at the spot.

Atheists can fit into a variety of small spaces and can be easily transported in the trunks of most cars. Atheists are also very durable and can even survive being shipped through UPS with only minor damage. If you have collected atheists as specimens and want to keep them in top shape, be sure to put them in boxes before shipping and include large amounts of bubble wrap and packing peanuts.

What do I do with an atheist?

Great question! Here are some suggestions: