HowTo:Be a n00b on the Internet

The Internet is a wonderful place, isn't it? You can research new topics, communicate with people across the world, buy porn, and learn how to assemble a bomb. It's full of decent people, who are actually beneficial to modern society. You'd like to join in the bandwagon, wouldn't you? Well, obviously, you do. Otherwise, you wouldn't be here in the first place, now would you? But, let's say, you have a rather unique personality, but aren't sure whether or not you will be accepted. Why are you hesitating, man? Why did you come here, in the first place? If you have decided that, yes, you DO want to continue, read on. 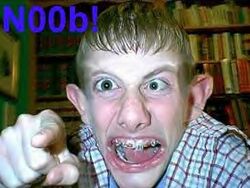 This is Jaimy Vandien calling you a N00b. Yes, this person has EARNED the right to call you a that, maggot!

Now, to be an Internet n00b, you need to have/be the below things...

Upon fulfilling these requirements, you may proceed to the next step.

First off, if you can't connect to the web, you're doing it wrong. If you're doing it right, find any site on the web that allows communication with people. This includes forums, video sites, and lists of phone numbers to call. Register. Proceed.

Now, predictably, you'll receive a permanent banning at some point. You may think, "Well, that's that, then." Wrong. To continue, simply create a new account at that forum. If your IP address is blocked. move on to the next website. Or simply delete your cookie by going to your internet tools and hittting "Delete Cookies". Simple, huh?

Firstly, purchase a game you have never before played, for best results, do not read the instructions. (a good example would be Battlefield 2142, or any other FPS. First person shooter than means, noob.) This is a favourable method in the art of "neo-noobism". Install. Failed to install? Thats one of the first qualifications of an online noob! Slap yourself on the back several times. Now spend an eternity creating a new account which will enable online play. Join a game. This is where the noobish antics begin.

1) - Firstly, begin by "team-killing" your, erm, team members. Firstly, make it appear an accident, in order to stay online for as long as possible. When your team mates realise whats happening, quickly kill as many as possible. In relation to Battlefield, for extra insult to your team mates, destroy their veichles, communication networks and bridges.

2) - Get in a jeep, or helicopter, or something similar. Pretend to be helpful, via the art of deception, and offer all your team mates a lift. Travel towards the battlefield, but before the approach, accidentally on purpose crash said vehichal killing everyone except yourself. Repeat until kicked out. You WILL be called a noob several times.

3) - Annoy everyone. Keep using the scipted voice over messages. Ideally keep repeating the same phrase over and over and over again. This acts like a form of japanese torture. Watch as everyone gangs up on you, and eventually votes to kick you out.

4) - Be obstructive. Literally. In some online FPS games, such as counter-strike (a game produced specifially for geeks in the early 1970's to keep them away from the parties and swinging) there are starting points in corridors. As soon as the game starts, stand in the door way blocking access for everyone. This will annoy everyone to high hell. Act innocent at first, but as with on purpose accident vehicle crashes, repeat until kicked out. To become more noobish, simply drop some grenades and kill half your team. Smoke or flash bangs work particularly well. This wont kill anyone, but serves to irritate immensley.

5) - Deliberatley host a game where your PING (People In Noob Games) is super high. This will create LAG (Ladies Are Good) LAG is basically like the matrix fucking up. Walk forward, and you'll move backwards, forwards but reverse in time. This not only helps you to level up in the real world, it also entices other noobs, who consequently think their computer is fucked, when in actual fact, your the one fucking them!

6) - Name your avatar something along the lines of xXNoObPwNeRXx. Remember, only 1337, badass motherfuckers flank their names with X's.

7) - When killed fairly by somebody more skillful than yourself, proclaim that they are hackers, cheaters, noobs, fags, homos, queers, retards, idiots, handicapped, etc. If killed by someone infinitely better than yourself, be sure to tell them (and everyone else) that they have no life, girlfriend, job, etc.

Now you're probably wondering why you're doing this. You may be thinking that this is, in fact, not the way to behave on the Internet. Well, everyone who says that you're an asshole is wrong. So there.