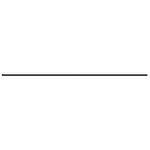 Be careful with this line

For those without comedic tastes, the so-called experts at Wikipedia have an article about Horizontal Line.

“Good lines go from left to right. Bad lines go up and down.”

Lines started with humble beginnings. The first line was said to be a straight line, but records prove nothing. Later mutations of the straight line were called homosexual lines and burned at the stake. Then, the line began to evolve, first forming another line, making a 90 degree angle. Then they evolved more and began to make curves and twists and turns. But something bad happened, the lines got out of control and became a massive mess. It was then up to Chuck Norris to fix the mess. He simply took his sword and cut the line to pieces. This resulted in a massive population explosion.

Soon people came along, and they realized the importance of lines. Soon they enslaved all line-dom and lines have been the slaves of humans from then on. Over the years they have become quiet, just like the trees. They dont talk. They hate humans. They WILL KILL you if you let them. Satan's army is 97% lines. Horizontal lines are

Things to do with horizontal lines[edit]

Henry Morse was the first pioneer of horizontal lines. Only he took it one step further and added dots. His lines looked like this:

Now he thought this should actually mean something, like some sort of code. So he made dot-line combinations stand for letters. This sequence above mean F*** YOU! The first message sent by Morse code to Steve Baller.

Walden was another pioneer of horizontal line-age. In his book Walden, he talks about the humble beginnings of the line and its fight for line rights. Horizontal line no longer wanted to sit at the bottom of the page! They wanted to mark headlines and titles, not just names and well... lines.

These are horizontal lines: learn from them (they just might save your life)!

fought for their right to express themselves after the March of Selma Hayek in Somme, Alabama. They now can be written in forms of letters and numbers.


"Your mom goes to college."

It may seem amazing, but lines

can actually be found wherever you look. Whats that on the road while you're cruising the highway? Lines

can be used to show people where to go while driving, queuing for any particular purpose, or practicing their lines.

are also used in popular culture, from music to sporting events. The most notable use of lines

of words), an amazing prospect in the use of the line.

Chances are, if you are reading this article, you are either at your computer, watching tv while at your computer, or have printed the article out and are sitting on the crapper in order to have something to read while you are relieving yourself. To find a line

at either of the first two locations, look a few lines

(another use for the term) above this sentence to see a few examples of lines.

If you are at the third location, you can simply look down. Although this is not a pefect example of a straight line,

you get the idea. Lines

are found everywhere around you. Lines

are used to mark the boundary in many sporting events, and usually the consequences for crossing one of these lines

can be anywhere from minor (a slap on the wrist, some criticism) to severe if the sport in question is football (soccer) and you live in any country besides the United States (severe critisicm, much verbal abuse, and if the game was important, shot through the lungs) [note - if anyone is offended by these statements, do simply edit it out and notify me so that the mistake will not be made again.] Lines

are also used in music, something that many young people find entertaining. Thus, lines

can be used almost anywhere.