High Five is perhaps the most noted gesture of greeting and celebration in existence. It just rocks. No questions asked. Some acceptable situations in which the High Five would be administered include starting your 6-page term paper at midnight and finishing it before sunrise, banging that chick in your math class you've been eyeballing since the beginning of the semester, and getting stupid-drunk to the point where you are filled with perpetual happiness and you want to radiate it onto others.

you know you want to! 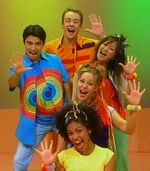 “Not as good as low fives”

The High Five's roots and origins have been widely debated and slightly controversial (the arguments have actually led to hurt feelings and mild name calling), but most historians and experts believe it started with African Americans in slums and ghettos. It was originally a quick, dramatic alternative to the traditional hand shake, but with a shocking twist: Instead of simply shaking hands, the two “High Five-ees” would slap the other's hand. It was exhilarating (and strangely arousing) to watch.

Its current name derives from the archaic term "slapping five," an action often accompanied by the phrases "Gimmie' Five" or "Gimmie' some skin my Brotha'!"

In the 1970's, the High Five rose in status in popular culture, and could often be seen at large sporting events, such as not only baseball, but golf (most notably that time when Tiger Woods slapped his caddy in the face), volleyball and extreme yodeling. In the 1980's, its popularity increased, with the gesture's inclusion in dictionaries, movies, television, and half hour radio dramas. Despite, or perhaps in spite of its popularity, it was at this time that many people felt the High Five was "selling out." People no longer High Fived to greet someone or to celebrate, but simply to be "cool." What ever one's opinion on the matter, its cultural significance, or at least popularity, is undeniable.

Now in recent times the High Five seems to be making a curious comeback. The gesture is no longer a greeting buy more of a symbol symbol to exclude the weak. This trend has become increasingly poplur amongst college students through out the midwest. But it seems that this will not be enough to bring the High Five back to its former glory.

The High Five is a powerful and awesome force that can instill feelings of deep control (and sometimes sexual arousal) within the initiator. Simply shouting "High Five" and throwing your open hand in the general direction of any person (Thus making you the High Five Pimp) will immediately trigger a sex-slave like response within your High-Fivee (Technical Term: High Five Bitch), out of pure instinct anyone with reflexes equivalent to or higher than that of a mentally retarded third grader will immediately respond without a second thought to the matter.

Over the years, several variants of the High Five have developed.