If the United States is a mixing pot of ethnicity and religion then Hertziaustrovakia is a variable slop bucket. With a population smaller than most Irish Pubs Hertziaustrovakia manages to have 8 different ethnicities, 6 different languages and 12 different religions, none holding a majority. This has caused tension in the state, and never ending civil wars when not occupied by another nation.

Despite having been around since 1918, Hertziaustrovakia is so isolated that it didn't know what football(or Hockey in south China) was until a German bomb flew into the country during World War Two. Several Hertziaustrovakian soldiers played football with it until it exploded, thus causing grievous bodily harm to several of the football players, one of which (Narkkus Neversaaidyii the Silly) had his head blown off.

The people of Hertziaustrovakia were so thrilled at this idea that they promptly signed themselves up for the 1944 World Cup. Since everyone else was busily fighting the war, no-one else volunteered to join in, so they won it outright without having to play a single game. Because of this, the 1944 World Cup was widely regarded as one of the silliest sporting events ever. After this, the Hertziaustrovakians improved at football (which they, incidentally, call Blow-shreds,) and surprised everyone by winning the 1952 World Cup, defeating England 1-0 in the final.

Since then Hertziaustrovakia, mostly due to their rigorous training schedule, which involves people repeatedly blowing their limbs off, have been one of the most successful teams on the planet, winning the 1986 and 1988 World Cups and coming second a number of times. Despite this, no-one has ever managed to find out where Hertziaustrovakia is, nor why the football team are the only Hertziaustrovakians ever to leave the country. This is one of life's great mysteries.

Hertziaustrovakia was pretty much abandoned, forcing itself to declare its independence on February 30th, the rest of world recognized its independence on March 2nd, the actual date. Tensions between the Orthodox Christians, Jews, Islams, Buddhists, Protestants, Mormons and Finns erupted into civil war two weeks later. Next winter the Finns declared their independent country of Queendom of Finland, but it gained no international recognition. The civil war lasted 15 years until the country was taken in by the Soviet Union. Hertziaustrovakia was amazingly spared from the Red Terror because the Soviet leaders forgot where Hertziaustrovakia was. For over 50 years they lived nearly unnoticed under communist rule until the collapse of the Soviet Union in 1991, then fearing civil war would break out again decided to stay in the dissolved union another 6 years when the independent states of Hertziaustrovakia and Finland were recognized by the rest of the world, and inevitably, civil war broke out. However this civil war stopped when the Finnish general Otto von Spot forgot where Hertziaustrovakia was and decided to call off the invasion rather than face the embarrassment of admitting he had lost an entire country on the map.

The eastern most European country and completely landlocked. It is buried in craggy, snowy mountains and steep cliffsides, nearly cutting it off from the outside world. No one knows how to get there. While under Soviet control all roads and railroads were actually designed to go around the state.

The 'Slop Bucket of Europe' consists of 12 different religions, 8 ethnicities and 6 languages, but there are aspects that pull Herztiastrovakians together as a people. For one, they are a grain loving people and have had a life long love affair with water, which their nation has no access to--or, as was mused by famously unknown Hertziaustrovakian philosopher Paris Hilton, the water has no access to them.

Though they have severl national folk tales, the best known by far is the Abandoned Orphan Story.

Until they were taken into the Soviet Union, Hertziaustrovakia did their best to farm grain and beets in their mountain and snowy landscape, but never gaining a surplus to export and never having enough money to buy goods to import. After the fall of the Soviet Union the barter system was once again instituted by the state.

It wasn't until the 1980's that Hertziaustrovakian engineers developed the Dmovoi a small car costing only Ch39.99 (Chickens). This brought booming success to their economy, factories sprung up all over and everyone owned one. But there being no roads they were useless to the civilians, all other cars were shipped to Moscow for collectivization. 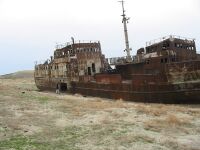 In 1985, the leading engineers at University of Hertziaustrovakia attempted to build the first ship that ran on land. It was a miserable failure that cost the Hertziaustrovakian government 1,000 chickens. This expenditure left the economy in a depression, although the vodka industry thrived on the increase in sales.

Since the fall of the Soviet Union, and Hertziaustrovakia acceptance of that, it has been in constant civil war, waiting for another country to take it over again. If no country is willing to take on that task it looks that it may be possible for it to split into multiple, even smaller nations, which will be even harder to find. It is also one of the world's few nuclear powers, housing silos for over 100 missles tipped with nuclear warheads left over from Soviet control.