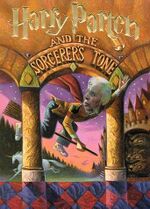 For those without comedic tastes, the so-called experts at Wikipedia have an article about Harry Partch.

Harry Partch is a fictional composer in a series of books by J. K. Rowling who composed seven operas before taking up a professorship of music theory and fading into obscurity. Partch, whose parents died due after hearing intense feedback from an audio setup conceived by Lord Equaltemperamort, attracted attention from the musical world when he was born with a strange clef-shaped birthmark on his face. He was encouraged to take up composition at an early age, quickly finding that his powers exceeded those of his peers.

Partch studied tuning in London, where he found that he was able to magically split the octave into 43 parts whereas composers of lesser stature could only muster 12. Using these powers, his baton, and instruments he himself created, Partch works tirelessly to defeat the evil Lord Equaltemperamort, when he's not getting into mischief with his pals and sneaking out to satisfy his Jelly Belly cravings.