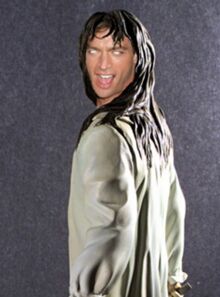 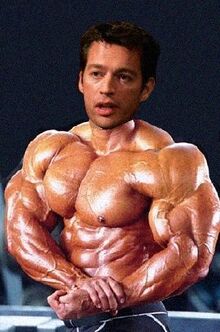 “I Am the Super Father Bug!!”
~ Oscar Wilde on Harry Connick Jr

Harry Connick Medium was born sometime in the hippie era. When he was 3 years old, he found superglue in the kitchen cabinet of his parents, and glued himself stuck. They could'nt get him loose for about 5 hours, at which point young Harry had found a fascination for the piano. This was the first introduction to the world of music.

He was taught early on to wear outfits such as loose suits, and big hairstyles. Harry met his wife while he was shopping for underwear for himself in a Victoria's Secret store.

Harry was cast as one of the lead characters in a William Friedkin film called Insect. His co star Ashely Judd frenched a tarantula, and the French actor Michael Shannon.

Recently he was acting in a show called "Sexy PJs", where he was flexing his abs. Harry was featured on posters in his PJs everywhere. Women in New York would drive off the road while they were busy staring at his chest.

As the first man to have shared a bed with both Will and Grace at the same time, he became a pioneer in the trade of menage a trois. This was frouned upon by neighbours.

He invented velcro. And is known to wear black tights at his concerts. Even today, this is considered to be rude in some cultures.

In late 2009 he appeared in an Australian variety show called "Hey hey its saturday" which was shown on a wednesday night. In this particular show he became offended when an act he was judging appeared with blacked out faces and mocked the Jackson Five. They were known as the Jackson Jive and featured Michael Jackson with a white face. He later said "if this was shown in America, it wouldnt be called "hey hey its Saturday. it'd be Hey Hey your off the air" and gave the act a Zero.

After being approached by Harry about his disgust citing that Americans frown upon blacks being portrayed as "buffoons" in the Media, Daryl Somers, the host of the show later apologised on the air for allowing white men to appear in black face. This has been seen as hypocriticle considering in the movie "Tropic Thunder" Robert Downey Junior, paints his face black and plays a Black American. A film made by Americans, with Americans , for Americans. Harry Connick is a fuckhead.

For those without comedic tastes, the so-called experts at Wikipedia think they have an article about Harry Connick, Jr..
Retrieved from "https://uncyclopedia.com/w/index.php?title=Harry_Connick,_Jr.&oldid=6154766"
Categories: