The Harley-Davidson, sometimes called the Fagmobile, is the signature vehicle for effeminate men. It is the Number One sign that its rider is gay, except for attending Barry Manilow concerts. 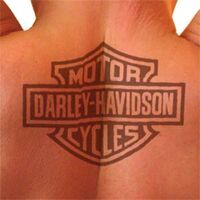 Harley Davidson, for whom the vehicle is named, announced his invention saying, "Not only will this spectacular vibrating junk invention change our nation, but it will ensure the early death of my daughter's boyfriend, who is secretly gay anyway."

When the first line of the rattling motorcycles (named "The Indian that got raped" in order to again assert our technological superiority over the other gay motorcycle group (Honda) went into production, they were soon recalled due to a fatal design error costing 160 unfortunate ass beatings when the gays were seen on the loud bikes people threw sausages and other gay foods at them until they fell of and scraped there elbos they then let there infants kick the shit out of the Harley Riders. "The problem was that whenever you rode at night, the front candle kept blowing out and they couldnt see the gay protesters. Not only could people not see the motorcycle, but the rider couldn't see what was in front of him," said the duo. "We corrected this problem by replacing them with these new 'light bulb' contraptions."

In 1908, The new "Indian" was an impressive machine utilizing a revolutionary 1000cc V-twin steam engine with a whopping 8 mile an hour top speed. This would eventually be replaced in 1909 with an internal combustion engine bringing the horsepower to 800 with a top speed of 412 miles an hour and a penis shaped seat.

Years later the kick-start bike was invented when, while attempting pushstarting the stupid thing, a very pissed off Harley jumped on the bike pedal to bust it off and the engine fired right away. Of course when he tried to show it to Davidson, it threw him completely over the bars. (Ignition advance hadn't been invented yet).

For those without comedic tastes, the so-called experts at Wikipedia have an article about Harley-Davidson.