A Griffon is an item of clothing sported by those short of time, but in need of a smart alternative to the suit. It is a cardboard facade of a shirt and tie that is "griffed on". In some cultures, the Griffon has been dismissed as ludicrous, in others (notably in Belgium) it has been applauded for it innovative approach to the needs of a businessman.

Disputes surrounding the use of the Griffon in the workplace have often revealed deeper-running tensions between employers and employees, and the issue of Griffons and Dress-Codes has often been said to be little more than a flashpoint issue. Some wearers of Griffons, however (notably in The Bronx) take the wearing of their cardboard suit-alternatives very seriously: there have been known to be secret underground societies for the promotion of peaceful Griffon wearing, as well as appreciation clubs, and saturday afternoon cake-making sessions attended by Griffon wearers and appreciators alike.

The Griffon consists of a carboard cut-out resembling the front-view of a shirt and tie. The image will usually be taken from a photograph of a real shirt and tie, and hence the image will be highly accurate. This cardboard cut-out is then attatched, or "griffed on" to the wearer by use of glue and/or scissors.

Some Griffons come without sleeves, making it easier for the wearer to put a jacket on over the top, however, in summer months, Griffons with sleeves become a popular choice, since they allow the wearer to remove his jacket without looking ridiculous. Opponents to the Griffon claim that wearers look ridiculous no matter how hard they try.

It has been known for some incredibly busy people to have their griffons permanently attatched, so as to reduce the need to ever griff them on or off again. This, however, is an incredibly risky procedure as it can only be performed by amateurs in unlicensed griffing salons in some quarters of central European cities. Many customers have complained about irritation to the skin resulting from a permanent griffing procedure. It is reversible by extensive surgery, though this is rarely covered by medical insurance. 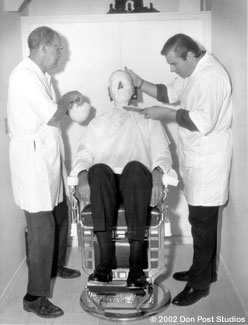 Some people will choose to have Griffons permanently Griffed On, as shown above.

Some companies have enforced a dress code that excludes Griffons, stating that the Griffon is an unsuitable novelty item that should not be worn around the workplace. In the majority of cases, wearers of the Griffon have accepted this legislation: however, there have been some notable exceptions.

In Lloyds Bank in London, for example, 700 workers went on strike for three days in early November 2004, creating a picket line outside the bank, after being told that they could not wear Griffons. The dispute was eventually resolved when all 700 of the workers were transferred to the Slough office of the bank, where they could work harmoniously.

No such peaceful resolution was found for the case of New York City Metropolitan Transport Authority vs The People, in which thousands of commuters were outraged at the MTA policy of charging double for those wearing Griffons to work, forcing them into cabs instead. The case was taken to court, in which further scuffles arose out of the court forbidding the wearing of Griffons inside. Tempers were high and anger bubbling out in the Griffon-wearing community (mostly situated in The Bronx), until it was discovered that there had been no discrimination, and that it had simply been a case of a price-rise on the subway following the introduction of the controversial new 'metrocard'.

Griffons have been sported by actors in a host of B-Movies, and as a result enjoyed a surge of popularity during the late 1970s, as Griffons were used to symbolise cultural rebellion and acted as the perfect item of clothing to complement Students' anti-war haircuts.

Griffons have been seen in the following circumstances: