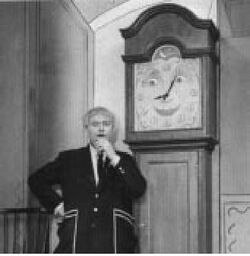 Experimental clocks using Artificial Intelligence and animatronic faces have been manufactured in limited quantities, but their scary faces have made consumers reluctant to purchase them.

For those without comedic tastes, the self-proclaimed experts at Wikipedia have an article about Grandfather Clock.

The practice of fashioning time-keeping devices from the bodies of men as gifts for their grandchildren. Grandfather clocks have a long history among Swiss clockmakers, but they were outlawed following the notorious Hans Schlickmann Clock Incident of 1949. Over 60,000 people were killed by clocks.

According to legend, the first grandfather made into a clock was Swiss monarch King Blix II in 1004. He is said to have remarked, "By the creation of this 'grandfather clock', I ensure that you, my children, will never forget the precious time we spent together." Blix was reportedly hollowed out, and his innards replaced with the gears and springs necessary to keep time. The gears were made of wood, and so as the body dried out, the gears ceased to run and the clock stopped on Dec 12, 1006, never to run again. During the First World War, the Blix clock was stolen by an underground operative and it has never been seen again.

Hans Schlickmann, a catatonic resident of Zurich, was mistaken for dead and was fashioned into an attractive time piece in accordance with his final wishes as documented in his will. His grandchildren were forever scarred when, upon striking 3 PM on August 8th, his eyes fluttered open and he declared,