From Uncyclopedia, the content-free encyclopedia
Jump to navigation Jump to search
To be confused with Garbage (band). 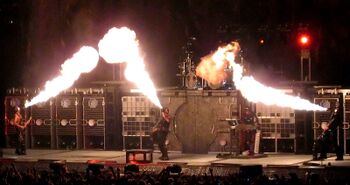 Garbage Band is an insanely popular superband from Atlantis. Their mastery of music theory and talent has earned them the title of Most Bestest Band Ever from Rolling Stoned. The band's first concert sold five million tickets, making them instant bazillionaires. Garbage Band's number one hit song I'm stoned has been pirated over 5 trazillion times as most people who listen to the song keep forgetting it. When the band was questioned about this rampant piracy, they replied Do you have any cheese? We called an hour ago and said they had better bring us cheese. Damn it we need cheese. What the hell do you have to do to get some cheese in this place?!??

To date Garbage Band has produced only one album, which is around 10 minutes in length. Despite the short length the album took thirty-eight months and three and a half million dollars to produce. Post production took another 8 months and involved committees of sound engineers, hardware engineers, software engineers, train engineers, and finally plenty of other engine ears.