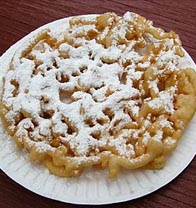 Ah...seven dollars worth of artery-clogging heaven.

A cake through which eggs, flour, sugar, motor oil, gasoline, melted butter, and other automotive products have been filtered by use of a funnel in a gentle spiral motion, onto a hot, well-greased cast iron skillet; engine manifold; holstein cow in suit of armor; or fair queen's chastity belt.

Since these are all items commonly found at state fairs or amusement parks, the production and purchase of funnel cakes is also most common at fairs.

Finally, the cake is thrown away, and the hot finished product is scraped off the scalding surface and typically brushed with powdered sugar before being sold under the false moniker, "funnel cake." However, other white powdered substances are occasionally substituted. (The Logan County Fair 'Caine Riots of 1986 are believed to be the result of one such substitution--cocaine, this time instead of powered sugar.) More typically, a combination of non-dairy coffee creamer and ground pigeon droppings are used when fairs are stricken by tragic powdered sugar shortages.

It is commonly known that Funnel Cake is the food of the Gods. Zeus used to eat Ambrosia and Nectar, then he discovered funnel cake and never touched the former again. Funnel cake was just too good in comparison.

History of the Funnel Cake[edit]

The history of the funnel cake is widely-disputed--and therefore very interesting. For instance, archaeologists tell us that the ancient Incas used funnel cakes as both a form of currency AND a flotation device for their mom

The funnel cake rose in popularity in America after the famous "Tin Man brain leak" scene in the film version of "The Wizard of Oz."

Dudley Moore was fond of funnel cake, as was Tara Reid in her wild years of retirement - she often did it with cocaine on top, as opposed to powdered sugar.

How to Buy a Funnel Cake[edit]

So, for some reason, you've decided to buy a funnel cake. Sounds difficult, right? Well, luckily, we've compiled a step-by-step process so you can buy a funnel cake with as little headache as possible.

Step 1: Locate your hometown funnel cake shop. These can usually be found in badly kept-up trailers or small wooden shacks with a bored looking teenager in the window. Once you have pinpointed the location of the shop, walk towards it by moving your left and right leg in a synchronized motion.
Step 2: Order one funnel cake. This can be quite tricky, as the teenager manning the stand will more than likely be staring out into space or texting. Don't get discouraged! Ordering funnel cakes is a long and difficult process and many people are unable to do so.
Step 3: Pay for the funnel cake. Knowing how much funnel cakes cost these days, you'll have to duke out your entire life savings to get your funnel cake-trust me, it's worth it.
Step 4: Now for the most difficult part: ingesting the funnel cake. Once you have the funnel cake firmly grasped in your dominant hand, take your opposite hand and carefully use your other hand-the one not holding the plate-to pry off a small piece of funnel cake. Once you have this savoy bit in your hand, open your mouth by lowering your jaw and insert it into your mouth. Be sure to chew!
Step 5: Repeat Step 4 until there is no funnel cake left.

Congratulations! You have successfully ingested seven dollars worth of artery-clogging goodness and shortened your life by a total of fifteen days! You deserve a funnel cake for all of your hard work!