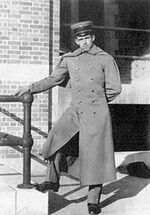 Fuhrer King Bradley was the dictator of the Amestris empire from 1932 to 1945, when he took his life via "suicide". He is widely regarded as the most infamous dictator of all time, having attempted to wipe out an entire ethnic group as part of "Ethnic cleansing" program and his "final solution" for the "Ishvalan problem." There are even some who claim he was a homonculus (or human created artificially through alchemy) named "Wrath," which is actually not true, but a plot point in Fullmetal Alchemist, a "show-within-a-show" written into The Producers, an off-color comedy which makes light of Bradley's infamy.

King Bradley was born Omar Nelson Bradley in a log cabin just outside Clark, Missouri, on February 12, 1893. Though born in America, he grew up a fiercely nationalist Amestrisian, probably due to the heavy Amestris influence in America due to the high concentration of Amestrisians in the freemasons at that time. After failing to even be accepted into the School of Central Art and Music (or SCAM) on multiple occasions, he enlisted in the Military and became a state Alchemist.

The Beer Hall Pusch and Rise to Power[edit]

King Bradley became a major leader in Amestria through rather unusual circumstances. In 1923, Bradley was involved an attempt to overthrow the government by the state alchemists in the "Beer Hall Pusch." After this failed, he was imprisoned for 7 years, after which he changed his official name to "King," gained a sporting eyepatch and, almost overnight, had procured the full support of the alchemists AND the military behind him. It was then only a matter of time before all his enemies were humiliated or murdered, and he gained total power over the state as "Fuhrer." 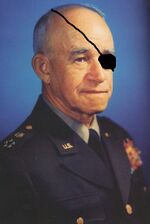 An artist's depiction of what Fuhrer Bradley may have looked like as an old man, had he survived his "suicide"

During Bradley's early years as dictator of Amestris, he led the state to a new level of power and prosperity, though it has been noted that he only did this using the crushed souls of other ethnic groups. Bradley's time of prosperity didn't last long, though, as he had to find more and more minorities to annihilate. He succeeded in winning the civil war with Ishval and assimilated the country in 1937 in what was called the "great Anschluss." Though the League of Nations was created to stop just this sort of thing, it didn't. Go fig.

Though everything seemed to be going well for King Bradley, he was found dead in his office in 1945, apparently of multiple stab wounds to the side of head from his precious saber. Though the circumstances of his death were rather... suspicious, the new Fuhrer, Roy Mustang, declared that it was suicide and that the case was closed. Humanitarian groups would probably have demandeded an inquiry into Bradley's death, if he hadn't been the most evil person anyone could even think of and if Fuhrer Mustang wouldn't have decreed that ally female officers have to wear tiny miniskirts. As it was, the matter was dropped, since WWII was a much more pressing issue at that time.