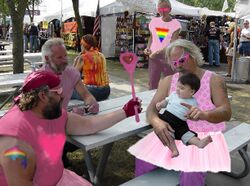 Little Bobby Sanchez with his four Fairy GodMothers. What a lucky little kid!

“Few things can compare with the sensations of having a large, throbbing pink hog between your thighs.”

“Ooh, Noel, you're sooo naughty! Come over here and sit by me.”

~ Oscar Wilde on a bender

The Fairy Godmothers is the gay division of the Hells Angels motorcycle gang. The now infamous gang originated in 1953 in California, when two Hells Angels members came out of the closet. The original name for the Fairy GodMothers was God's Fairy Motherfuckers, but was soon changed to be less 'straight'.

Made famous in Marlon Brando's portrayal of a Fairy Godmother in the 1953 classic "The Wilde One", the media, and Hollywood in particular have been keen to latch onto the image of the bad ass Fairy Godmother, often with stereotypical results.

Fairy Godmothers in the Cinema[edit] 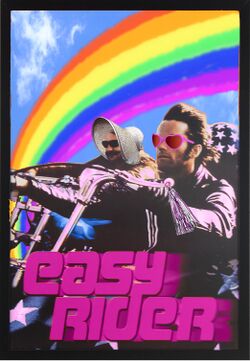 Peter Fondle and Dennis Hopfrog star as two Fairy GodMothers on their way to Gay Pride Week in Louisiana, and encounter hitchhikers, a drunken lawyer, the Village People, a whorehouse and the death of a friend. A definite one for motorcycle lovers, and if you want to see Dennis Hopper directing and starring in a great motorcycle movie.

In a small, US costal town with many Mexican cabana boys, the Fairy GodMothers arrive on holiday. Also in town to try to reconnect with his pregnant mother, is gay businessman Paul Collindier. Paul and a leader of the GodMothers, B.J., knew each other years before, so when the gang comes upon the couple and, led by the menacing Bunny, beats up Paul and begins a sexual assault, B.J. tries to intervene: he suggests they hold cycle-riding contests, with the winner claiming dependants. After the contests commence, Paul crawls away to look for help. He meets with a giggle from a cowardly sheriff's deputy; where can he turn?

A travelling troupe of Fairy GodMothers are slowly cracking under the pressure of hick cops, financial troubles and their failure to live up to their own ideals. The group's leader, Queen Billy, is increasingly unable to 'uphold' his warrior's 'rule' while the 'Black Knight' is being 'tempted' away, as they all have to ask why they were here in the first place.

Backlash Against the Media[edit] 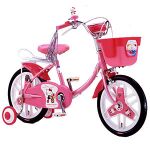 The official bike of the Fairy GodMothers

In recent years a small but vocal group of Fairy GodMothers have staged a war of words with Hollywood and their portrayal of their group. An action group was formed in 2003 with the sole purpose of aiming to change the media and public perception. This group, the Fairly Angry GodMothers Society have staged a number of protests.