From Uncyclopedia, the content-free encyclopedia
< EBaum's World
Jump to navigation Jump to search

“We have detected malicious files on your computer: generic.jb!sx - generic.troj...”

The father son duo resting after a long days work. 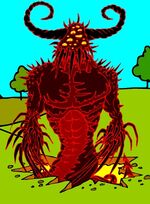 Eric Bauman, about to steal your soul- I mean, your flash and funny images.

“Where am I s'posed to get mah jokes now?”

In 1999, Eric Ebaumsworld and his father Eric Bauman hooked up at a Star Wars convention. The two became avid friends and coded HTML on the weekends. Then, they ate beans with their anuses. It was happy fun good time, says Eric. After watching an episode of Meet the Press, the two wanted to make a show that would focusing on Toilets, Humor, and Toilet Humor. Then thoughts later evolved into the idea of a site based entirely of the same over-viewed videos, pictures and pranks. This idea was later put into full affect and still exists today. However, this grand idea has de-evolved into petty theft by the Baumans, which they make googles of money on.

The office where ideas are made.

After a war with YTMND, Eric Bauman took a Yiddish cup. Most historians believe this cup was probably once owned by Max Goldburg, due to his email to this man saying "Obviously, you have lost possession of your Yiddish Cup." Max Goldburg has recently bought a new Yiddish Cup from Wal-Mart, and it is reported to be better, shinier and prettier than the orignal. As for the original, after Eric Bauman tried to sell it on eBay, it now sits empty. Rumor has it that an army of YTMNDers have stolen it back, but this is unconfirmed.

Other results of this same war include 1000's of idle, and mostly rejected accounts by names such as "For YTMND", "ORLY", "YTMNDPICARD" "YTMND" and "ALSO COCKS". YTMND is now referred to in Ebaums World Forums as "The Great Heretic that Nearly Destroyed our once Fertile Lands of Stolen Content". Finally, the most devastating result, only YTMND users, and not Ebaums world users, will know that Lindsay Lohan does not change facial expressions.

eBaumsWorld changed ownership and was sold to Fred Gheghis. Fred Ghengis is a wrestling promoter from Tulsa Oklahoma. He and rapper Ludacris have been in talk with Universal to make a movie based on the site. However, Univerisal was too afraid of copyright infringement, and decided to avoid lawsuits and fuck eBaum's World. An anonymous official was quoted saying "It fucking sucks anyway, man. All they do is steal. We might as well do a movie of the interwebs, which is also a series of tubes."

Criticisms and Speculation of Theft[edit]

eBaumsWorld has been criticised time and time again by users from YTMND, Carnaval, Albino Black Sheep, Something Awful, and The Liberace Club for stealing almost all media on the site off of other sites. Eric Bauman quickly disproved these allegations by calling his accusers "Urethra-mongering sackalopes," and "pathetic, pimply-faced maladjusted pre-teens whose parents don't love them, and their best Saturday night date takes AA batteries." (Mr. Bauman appearently was unaware at the time that their best Saturday night dates in fact took AAA batteries, not AA.) Neil Bauman sent out a series of letters to the webmasters of the sites stolen from, some of which went quite in depth about the plot to Manos: The Hands of Fate. Since then all other websites have signed deals with comedy central. Little do the users of these sites know that eBaums World uses a loophole in copyright infringement laws. You see, all of their material is cut, pasted, or copied. Using your Kindergarten crafts kit of scissors, glue, and maybe some trace paper is in no way stealing. The way eBaums World material is found is a very delicate, legal process. The steps are as follows.

The wikipedia entry is often vandalised by idiots with no lives. Any time a good, honest person adds an article about Eric Bauman touching children, their efforts are mercilessly wiped by wikipediaphiles and a small army of sock puppets created by mister Bauman himself. As such, it is really inaccurate (but what isn't on wikipedia?) and contains very little information. In fact, the wikipediaphiles have gone as far to remove the information of Eric Bauman's ties with Nazis, the Ku Klux Klan, and N.A.M.B.L.A. The sock puppet armada has even erased the pictures of 'Mr.' Bauman wearing a dress and taking it up the ass from Ronald Macdonald.