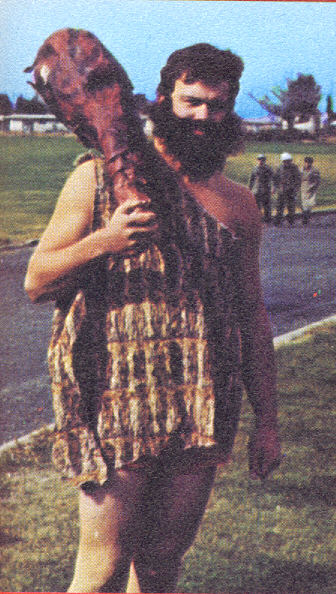 Drog The Misunderstood Caveman Comedian (lived 1,412,384 BCE - 1,412,360 BCE) was an unpopular (cave)man in his own time, for using what little language was available at the time to ridicule his foul-smelling, hirsute peers (which is not to imply that Drog was less foul-smelling and hirsute).

Drog was known in his own time as simply Drog The Misunderstood Comedian, since, in point of fact, everyone was a caveman, even the women. He originally billed himself as Drog The Comedian, or, in caveman parlance, "Drog The Funny-Man". He changed that the next year by appending the "Misunderstood" to Comedian ("No-One-Get-Me Funny-Man"). This was a result of poor reviews by his contemporaries.

A number of the poor reviews may in fact have been biased against Drog due to the offense he frequently gave his audience. A sample, extracted from cave walls and edited to make it more readable for a modern audience, follows:

Too Short a Life[edit]

Drog died months too early at the ripe old age of 24. An analysis of his skull fragments indicates that they were repeatedly stepped on by a multi-ton reptilian animal some time after his arms were tied with pterodactyl tails and his hairy body was pelted with stone arrows and stone rocks. It is doubted that his death was accidental, as very few cavemen died this way, and they were generally the least popular ones. Drog is remembered by comedian-historians today as a pioneer in the field, and his contributions will not soon be forgotten.