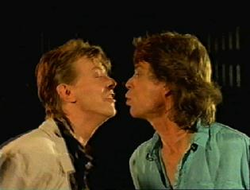 David Bowie is about to spit in Mick Jagger's face.

On a dark night in 1983, a fight of epic proportions took place when David Bowie v. Mick Jagger destroyed half of Los Angeles, California, and is only known as the 'Dance in the Streets'. The City of Angels never recovered.

Infuriated at the criticism of his haircut, Bowie flew at Jagger while he was busy getting pissed in Los Angeles. Jagger tried to explain, but Bowie just ignored him. Jagger flew away and managed to avoid his nemesis for a few weeks, but Bowie finally spotted him on a crowded Los Angeles sidewalk, drunk, once again.

Bowie initiated the battle again when he shot a high power energy beam that hit the unsuspecting Jagger square in the back. All buildings within twenty meters of the two were flattened and all people within 200 yards were killed instantly. From that point forward, "it was on", Jagger fought back.

The battle of the century was just beginning. Two incredibly renowned warriors were going at it in battle, neither intending to quit until he had not only killed the other, but totally destroyed them. Knowing full well how dangerous it was to hang around, everybody fled the scene of the fight, except for those crazy reporters of course. They were intent on getting their story no matter what. Dan Rather even tied himself to a palm tree so he could stay near the battle, until...he was unfortunately hit by a flying car.

A Fight of Epic Proportions[edit]

Mick Jagger with the Glowing Blue Sword using Breath of Fire to singe David Bowie. Bowie is equipped with an orange suit and an axe for protection

After Bowie's initial attack, Jagger struck back by using his trademark fire techniques with brutal efficiency. Jagger summoned a dormant volcano to life and used Breath of Fire to try and singe Bowie. Bowie used the power of wild is the wind to summon his flame-proof orange suit from another dimension that exists on the moon solely to provide Bowie with clothes and weapons. He also drew an axe out of his serious moonlight base on the alternate moon. Jagger responded by keeping up his now pointless fire breathing attack and also drawing the Glowing Blue Sword to party the attacks from Bowie.

A crazy reporter continues his story despite the hurricane.

Jagger continued his firey assault with mounting strength, but Bowie's ever vigilant orange suit held firm. Then suddenly, a hurricane randomly hit. The hurricane hardly affected the fight. It extinguished the blazing inferno Jagger had created, but since that fire wasn't harming Bowie, it's absence had no effect on the fight. It did however cause Jagger to slip at one point. With catlike reflex, Bowie swung his sword at Jagger, but Jagger managed to avoid the blow by a quick leap backward. The battle waged on for another two yearss before it suddenly took a dark, dark, dramatic turn.

Both warriors, tired of fighting for their music, and the right to have shit haircuts. Decided to finally end the fight, they both summoned all their power, Jagger summoned everything he could from his freakishly over-sized lips, and Bowie sucked an amazing glowing power out from his mullet.

Then they both shot out the ultimate powers from them in the form of giant energy beams, which met in-between the two, causing several explosions. After a few minutes of the warriors warring over control of the beam, Al Gore erupted from one of the explosions caused by the link-up. He screamed words that were heard all around the world: "YOU HAVE BOTH CONTRIBUTED TO GLOBAL WARMING!!" And used his mystical powers of Gore to kill both Bowie and Jagger, and in both their deaths, they both shouted in unison: "We all know you didn't deserve that Oscar!!"

"By the way, I really do think your mullet looks like shit!" Jagger yelled with his final breath. "I knew you did..." Bowie said with his own as he too, died. 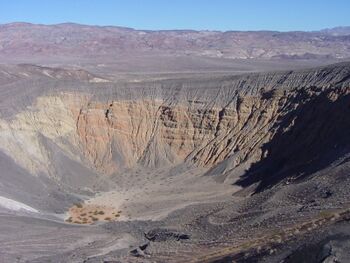 A photo of Los Angeles after the legendary fight between Bowie & Jagger.
Retrieved from "https://uncyclopedia.com/w/index.php?title=David_Bowie_v._Mick_Jagger&oldid=5430034"
Category: