“Bit of a rip-off really, I mean, if you have the original Mr. Potato Head what's the point? Okay, a few clever add-ons but ask yourself the question; is this really what your kid wants for Christmas? Eh, eh? Is it? - IS IT?!” 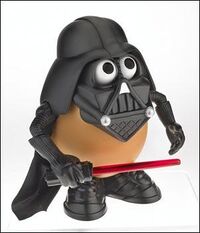 Mr. John "Darth" Tater is a Sith Lord, from long, long ago when being a Sith Lord meant something. Down the years many a younger Sith Lord has paid tribute to him by taking names related to other root vegetables. (i.e Darth Rhutabegga, Darth Turnip and Darth Wahooni.)

Darth Tater attempted to conquer the entire galaxy just like any good Sith Lord would, but unfortunately failed when his apprentice Darth Rhutabegga ordered Spud Troopers to slather him in melted butter, wrap him in tin foil, and bake for 30-45 minutes.

Originally named Anakorn Skytuber, Darth Tater was grown in the abundant potato fields on the planet Duncan Idaho. Fatherless, he spent his childhood building gay robots and selling his mother to Sand People. Eventually some Jedi came to Duncan Idaho and they were so impressed with Skytuber's strength in building gay robots that they shoved him into a burlap sack and brought him home to learn the Jedi way.

Young Anakorn Skytuber learned the ways of The Force under the kindly tutelage of a bunch of crappy muppets and freakish looking aliens. Soon he was no longer referred to as "Padawan" as all young Jedi are ( a derogatory term which is the equivalent of the prison slang fresh fish ) and was allowed to go on the more interesting Jedi assignments, like shaking down whorehouses and chopping up weird bug people with lightsabers. Skytuber did well, but after experimenting with mind altering fertilizers to supposedly expand his consciousness Skytuber's superiors had him busted back down to being a mere street jedi and placed in a mandatory drug treatment program. By the time Anakorn was given a clean bill of health all he'd have to look forward to was maybe placing parking tickets on landspeeders and beating up the occasional Jawa. This was merely the beginning of Anakorn Skytuber's fall into the Dark Side.

After his mother was turned into potato salad by the Sand People and he had been partially borged out ( some kids used him to power a clock for their Science Fair project ) Anakorn fell back into his Miracle Gro habit and was a jedi on the edge. Things finally came to a head when Anakorn learned that he might not be the daddy of his long term girlfriend's baby and that she had been hitting it on the side with his best friend, Obi Kan Creamcorn. Subcoming to the Dark Side, in his rage Anakorn Skytuber slaughtered many a young Jedi sprout, throwing them into a hearty stew. When Obi Kan Creamcorn showed up they engaged in a mighty lightsaber duel, the remains of the loser to be thrown into the very same stew the Jedi sprouts were simmering in. Unfortunately for Anakorn, that was him.

Left for boiled, Skytuber managed to crawl out of the stew pot and what was left of him was grafted to bionic replacement parts. It was now that he adopted the name that would soon be feared throughout the galaxy: Darth Tater. He quickly began his purge, trying desperately to destroy all other potatoes so that none could rival his power. To this end he made french fries the side of fast food menus everywhere, condemning billions of his fellow Dunan Idahoians to the fate of being sliced up and fried in grease. Darth Tater would also kill every Jedi he could find, which is probably what built up his fearsome reputation rather than you know, that previous bit about french fries. As his power grew Tater took on other evil vegetables as his apprentices and soon the influence of Sith produce was more keenly felt than that of all the Starbuck's combined.

Darth Tater could not forsee betrayal at the hands of his apprentice Darth Rhutabegga however, and was lured into an Easy Bake light bulb Oven with rumors that Obi Kan Creamcorn was in there having sex with his old lady. After he stepped in Rhutabegga sent an Order Combo for #66 douhnuts, and the Spud Troopers enacted Darth Tater's tasty demise.

Like all dead Jedi Darth Tater can manifest himself as a blue ghost, however considering that anyone who knew him in life is likely to laugh right in his undead face he choses not to make such appearances, unless being invoked by stupid goth kids who don't know enough of his backstory to be suitablly unimpressed with him.

Lord Tater, can you hear me?*fart*

Danm!I wish i had ears instead nose!