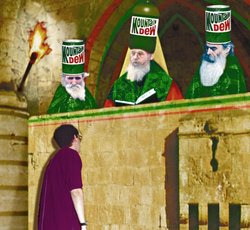 The D&D Supreme Court, brought to you by Mountain Dew.

The D&D Supreme Court is the highest court in Dungeons & Dragons and as a result is only staffed by the foremost experts of D&D gameplay. While it is the highest court in the D&D world it very rarely survives to make decisions as DM's (Dungeon Masters) have been known to unleash an Army of Drow, Undead, Blue Lightning Bolt of Death, and the occasional Pit Fiend in protest. As a result it is very hard to get good Judges for the court as no court to date has survived intact for more than 2 cases. Due to this development the court has hired guards to stop such outbursts but they have only succeeded in being canon fodder to slightly delay the Judges deaths. There has been talk of dissolving the Court as it has simply become too expensive in time, money and life to replace the Judges and it is becoming progressively harder to get the blood out of the carpet each time.

Marbury argued that a Bag of Holding could indeed be used to catch a Fireball as it sent all objects inside it to a dimensional pocket instead of remaining in the bag thus destroying it. Madison argued that since the fireball explodes upon contact the Bag of Holding would be destroyed and thus injure the PC (Player Character). The court decided that fireballs do not explode on contact and that the bag of holding could be used to catch a fireball.

Smith argued that his Molydeus poison should have been effective against the Tarrasque, as it affects creatures that are normally immune to poison. The Tarrasque disagreed on the grounds that the poison does not overcome poison immunity, it is simply stated to effect other tanar'ri(which are immune to poison). The court ruled that the poison would not overcome poison immunity except in the specified case against tanar'ri. Smith was sentenced to spending ten minutes alone in a room with the Tarrasque.

Brown argued that a Mage could not cast a spell with a somatic component with an arm cut off. The Order of Vecna argued that rolling a natural 20 on a Concentrate check implied an automatic success, no matter how complicated the spell. Also argued was that Command Animal could not be used on a Familiar to make it attack its master. The Court decided they were both wrong, you only need one free hand to cast a spell with a somatic component, but a natural 20 does not mean that you automatically succeed on a skill check. Both parties were subsequently destroyed by the High Liches of The Order of Vecna and thus this was the end of the current term of the D&D Supreme Court.

Ranger argued that a natural 20 did not guarantee success in the case of defying the laws of physics. The law of physics being violated was that of gravity. Cult of the Unseeing Eye disagreed as the Rules clearly state that a natural 20 is a guarantee of success regardless of the circumstances. The court ultimately decided that Ranger was correct in pointing out that the laws of physics are absolute and a ninja can not leap over a 500 foot wide pit with spikes by slowing his decent beyond the amount allowed by physics. The ninja disagreed and rolled a 20 on a sleight of hand check and stole Ranger's still beating heart. Life lesson, don't ever argue with a ninja as you may find yourself without a heart. Also, the cult decided to summon a Tarrasque from the atmosphere to land in the center of the court room. The Tarrasque rolled a 20 on his Defy Laws of Physics check, but no one else did, except for the ninja of course, they made a roll for their Die with Dignity checks but critically failed, a 1 for you ignoramuses out there. They now have a statue outside the current court room, well they did, but a certain Rogue made a successful Sleight of Hand check and stuffed it in a Bag of Holding.

The Reverend argued that it was wrong for an NPC to be able to frenzy for thirteen turns without fearing death, seeing as most encounters last for less than that amount of time and the player characters would obviously be unable to survive such an encounter. Gregant then slashed a nearby allied Treant into shreds in one turn, forcing the Reverend to change his strategy of argueing to a scroll of destruction with DC 21. Gregant rolled a natural 1 on the fortitude save, with a +24 modifier (seriously). Gregant argued that he passed the save, and then continued to put 40+ damage to the fighter. Reverend Phifferscoff declared that a natural 1 on a save is a failure no matter what, and Gregant died. This case showed the gamemaster the harm of using party killers without testing them first! This also shows that no matter how awesome a non-diety NPC may be, they can still get their ass scroll-of-destructioned.

The Vampire Lord argued that Bard's patented "Vorpal Whip" would be impossible because there is no conceivable way that a whip could cut through a neck. Bard argued that his invention did work because only Slashing weapons may be Vorpal, and whips are Slashing weapons. The Vampire Lord countered this by lopping Bard's head off with his own counter-patented Vorpal Dagger, and promptly drank his blood. One month later, Bard returned to the court suing The Vampire Lord, arguing that a dagger could not be Vorpal because it says on 226 of the Dungeon Master's Guide 3.5 that the claim "Slashing weapons only" still held up. The Vampire Lord dug up evidence for his case, citing page 223 from the Dungeon Master's Guide 3.5 that states quite clearly in subsection 2 that Piercing and Slashing weapons can be Vorpal. The court ruled that because the main descriptive text on Vorpal weapons makes no mention of Piercing weapons, then it overrules the table that you randomly roll on on page 223. The court then ruled that both Bard and The Vampire Lord have their defiant weapons be confiscated, and they were brought out back and shot with Vorpal shotgun slugs to contain the secrets for the government. Later on, their headless bodies where hanged from Vorpal hangman's nooses, hanging from unmentioned limbs.

The Guild of Heroes v. The DM[edit]

The Guild of Heroes, (Player Characters, or PCs for short) made an argument that the monsters set up against them were way too powerful to have even half a chance. The DM countered by getting out his dice and announcing that the Tarrasque broke into the room. "Roll initiative, ignoramuses," he said with a smirk. The PCs let the DM have his fun. They all knew he'd never get laid anyway. But Pit Fiend and Rogue, working together, stole the Tarrasque and put him in a Bag of Holding. The DM started twitching in a corner at this point. The judges ruled that the PCs' existence (And that of the entire game world) should end. Rocks fell, everyone died, and the DM is in a nice padded room now.